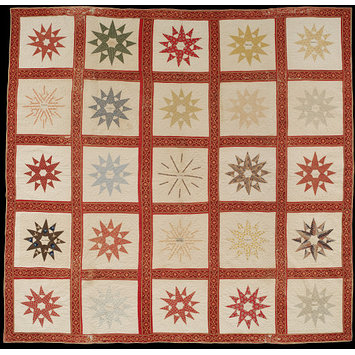 Quilts that incorporate signed blocks were particularly popular in America in the mid-nineteenth century. Often termed 'signature quilts', they were usually made from cotton fabric and composed of pieces sewn and signed by family members and close friends from the local community. Most can be associated with a lifecycle event - such as a birth or marriage - and were designed as a presentation device that helped to promote familial and social cohesion.

This 'Bride's Quilt' was created for the marriage of John Haldeman and Anna Reigart in 1846. It is pieced in a pattern often referred to as 'sunburst' or 'rising sun'; a popular design given its symbolic associations with the dawning of a new day.

Bed cover of cotton patchwork, applique and quilting. Handstitched throughout. The top of the quilt consists of 25 square blocks arranged in five rows of five blocks. The blocks have a cream coloured cotton ground onto which is appliqued a 12-pointed star design. The appliqued pieces are coloured printed cotton fabric. The same print is used throughout a block; different prints are used for each block except in three instances where the same print has been used on two blocks. The grounds of the printed fabrics used for the applique are variously red, pink, blue, green, yellow and cream. In the centre of each star design, except for one which is left blank, is written in India ink either a name, sometimes with a date or place name, or a short homily. A red and yellow printed cotton has been used for the sashing or border between the blocks and also for the border of the quilt. The sashing and the border vary in width between 8.5 and 11cm.. The corners of the borders are mitred. The quilt wadding consists of cotton fibres. The backing of the quilt is made from a plain weave white cotton pieced together in widths of about 89cm. The quilt is hand-quilted, apparently from the back, with single feathered wreaths with square diamonds in the centres and corners of the wreaths and chevrons along the sashing and borders. The quilt has a narrow self-binding which has been made by turning the backing fabric to the front, concealing the raw edge and slip-stitching it in place.

United States of America (Made)

Kate; Fanny L Hayomaken January 1854; Mary Augusta May 28th 1846; Daddy George; Rosie Jenkins.
Grandmother; John Haldeman 1846 Ina Haldeman; To you my love shall never vary I am your own true cousin Mary (original); Kate Rogers Churchtown; Eliza Richards.
Uncle David; Where you see [?] think of LR [?]; Mary F Jacobs; [?] M L [?]; Rachel Rogers Churchtown.
Aunt Hennie; Maria E [?] Phila.; Aunt Phoebe To that name's long memorial no merits attach Let the name pass away with this calico patch; Kate Reynolds; "Hennie".
Mother; Mary Hopkins; BLANK; Mary L Roberts; R J Haldeman.
These are the ink inscriptions in the centre of the applique blocks. Working from left to right across the rows beginning with the top row and working down. 'Phila' would appear to be an abbreviation for Philadelphia.

According to the donor's family history, this patchwork quilt was created for a marriage between John Haldeman (born 10 October 1825, died 14 December 1894) and Anna Reigart (born 28 June 1826, died 1900).They were married at the family home at Windsor, near Churchtown, on 23 March 1847 by the Rev. William Wilson Latta. They emigrated to England in 1880, living first at Sydenham and then at 4 Woodland Hill, Norwood, where John Haldeman died. He was buried at Shirley, Kent.

The Haldemans were originally ironmasters who became extensive landowners. The family was prominent in politics, and relatives of John Haldeman included Senator RJ Haldeman, whose signature appears on the quilt.

Extensive research carried out by the donor has led to the identification of many of the names on the quilt: 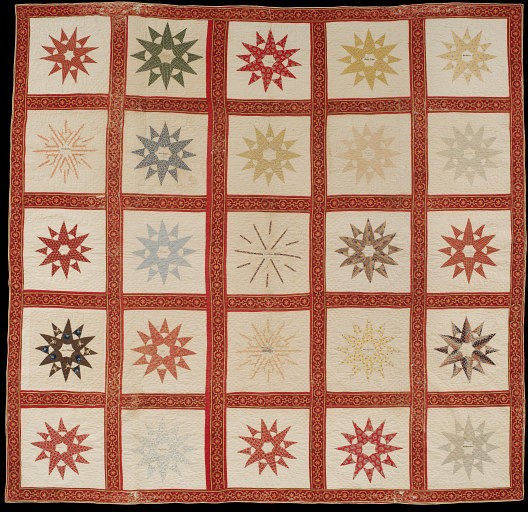