If you would like a larger file, or to use the image in other ways, contact our Licensing team.
BETA
+78
BETA
+76
images
On display at V&A South Kensington
British Galleries, Room 57
This object consists of 28 parts, some of which may be located elsewhere.

This bed is in the typical style of carved wooden beds of the 1590s but it is remarkable for its large size. It is over 326 centimetres wide. The height was slightly reduced in the 19th century. The human figures carved on the headboard would originally have been brightly painted.

The bed was probably made as a curiosity to attract customers to one of the inns at Ware, Hertfordshire. Ware is 22 miles from London, then a day's journey on horseback or by coach. The town had many inns in the 1590s.

The bed has been famous since it was made. William Shakespeare mentioned it in his play Twelfth Night, first performed in 1601. The contemporary playwright Ben Jonson called it 'the great bed at Ware' in a play in 1609. Visitors often carved their initials on the bed or applied red wax seals, which are still visible on the bedposts and headboard today. 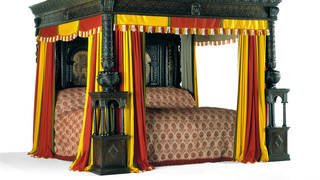