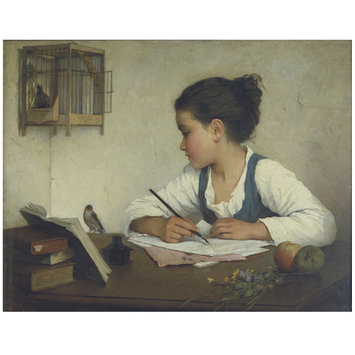 Henriette Browne was the pseudonym for Mme Jules de Saux, née Sophie Boutellier (1829-1901). She specialised in genre scenes, especially Near-Eastern and religious subjects, as well as portraits. She also worked as an engraver. She started exhibiting at the Salon in Paris in 1853 and exhibited at the Royal Academy, London, between 1871 and 1879.

This painting is a fine example of Henriette Browne’s output as it combines a genre scene, a little girl distracted while doing her homework and a child portrait. The interest in everyday life and close observation of nature is characteristic of the French Realist movement emerged in the 1840s.

Painting of landscape proportions, in oil colour on canvas, showing a girl seated at a table and writing. She wears a white blouse or chemise with long sleeves, beneath a sleeveless blue bodice with a scoop neck, and her curly dark hair is knotted at the back of her head. Her writing implements include a banker's pen, a bottle of ink, and a sheet of blotting paper, and she is apparently copying out a handwriting exercise from a book propped in front of her. Also on the table are two apples and a handful of wild flowers; a goldfinch is perched beside her on the table edge, and another is in the opened cage on the wall behind her.

Historical significance: Henriette Browne was best known for her genre scenes and portraits of women and children. This painting is a fine example of her art as it combines a portrait of a young girl and a genre scene, the young girl being distracted by a goldfinch while doing her homework. The twisted pose of the young girl, which reveals the basis of her neck, and her hand suspended over the page give the sitter an interesting gesture while she seems to engage a one-on-one conversation with the goldfinch who escaped his cage.
The bird's cage can be construed as a metaphor for the imposed homework while the fact that it is opened alludes to the possibility of escaping such task by distraction. Birds in general are a symbol of freedom and goldfinches in particular enclose a Christian meaning as they embodied the soul of man that flew away at his death. Goldfinches were once a favourite pet with children thanks to his handsome plumage. In this regard, it is most likely that the present painting corresponds with the one entitled The Pet Goldfinch exhibited at the Royal Academy in 1875.
This compositional idea provides the picture with grace and poetry, which enhance the innocent character of childhood. This type of pictures achieved extraordinary success with both French and English patrons. 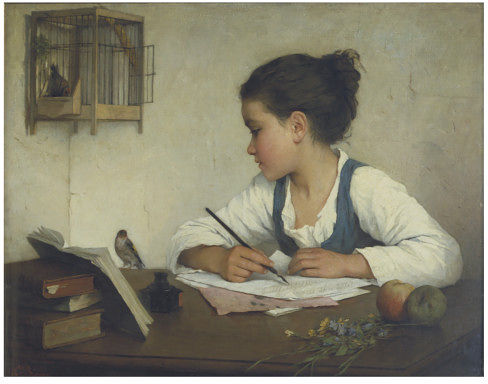