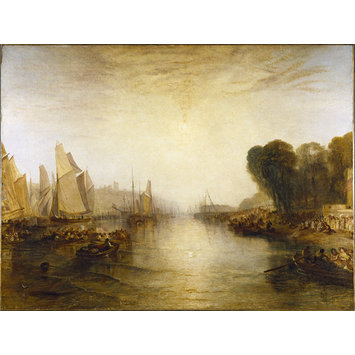 This is one of two paintings by Turner depicting the Royal Yacht Club races at the Isle of Wight. They were painted for the architect John Nash, who lived in East Cowes Castle, which can be seen in the background. The critic John Ruskin believed this to be 'one of the highest pieces of intellectual art existing'.

Oil on canvas depicting East Cowes Castle on the Isle of Wight. The castle is pictured faintly in the distance with numerous sailboats and rowing boats on the water in the foreground. The shoreline is packed with lines of people watching the boats.

John Sheepshanks; by whom given to the museum 1857

Historical significance: FA2l0 was painted for the architect John Nash (1752-1835), who owned East Cowes Castle, in 1827-8, and was exhibited at the RA in 1828. Turner visited from the end of July to September 1827, and Reynolds, and Butlin and Joll, fully discuss the circumstances and progress of the commission. Nash designed the neo-Gothic castle, which was built in 1798 (since demolished; see the view in the Polite Repository 1800, copy in the V&A collections). In the painting it is seen on the hill above the River Medina, at Cowes, Isle of Wight. The Royal Yacht Club was founded at Cowes in 1812, the second series of races being in 1817, in the first week of August.

The full title of the work, given in the RA catalogue, was 'East Cowes Castle, the Seat of John Nash, Esq.; the Regatta Starting for their Moorings'. The painting was admired by the critics, particularly as the subject was preferred to those of Turner's other exhibits in 1828, 'Boccaccio Relating the Tale of the Birdcage' and 'Dido Directing the Equipment of the Fleet' (both now Tate Gallery). In a long passage in Modern Painters, John Ruskin analysed the painting with characteristic care for detail, beginning by noting that 'Intensity of repose is the great aim throughout, and the unity of tone of the picture is one of the finest things that Turner has ever done', and concluding that it is 'not only a piece of the most refined truth ... but, to my mind, one of the highest pieces of intellectual art existing'.
Butlin and Joll compare this painting and its companion with the pair of views of Tabley House exhibited at the RA in 1809 (pp61-2, cat nos 98, 99), and the two views of William Moffatt's house at Mortlake exhibited at the RA in 1826 and 1827 (pp130, 133, cat nos 235, 239), which they note as anticipating the present work in that 'although the exhibited titles give prominence to "East Cowes Castle", the castle itself plays an extremely minor role in the finished compositions'. They also draw attention to the figures just discernible in the background, which are sketched in the manner of Watteau, as in the 1822 painting 'What You Will!'

The companion painting 'East Cowes Castle, the Seat of J Nash, Esq., the Regatta Beating to Windward', also exhibited at the RA in 1828, is now in the Indianapolis Museum of Art, Indiana (see Butlin and Joll p135, cat no 242, repr pl 262). Preparatory oil sketches made on his visit to Cowes are in the Tate Gallery (Butlin and Joll pp142-5, cat nos 260-8); three relate to the present work, and Reynolds suggests two were painted directly on the spot. There is a small (33.1 X 49.2 cm/13 X 19? ins) picture, 'Yachting at Cowes', in the Auckland City Art Gallery, New Zealand, supposedly signed and dated 1835, with a similar composition; Butlin and Joll doubt its authenticity (repr Connoisseur March 1959, p91).

Reynolds deals at length with the physical condition of the present work. 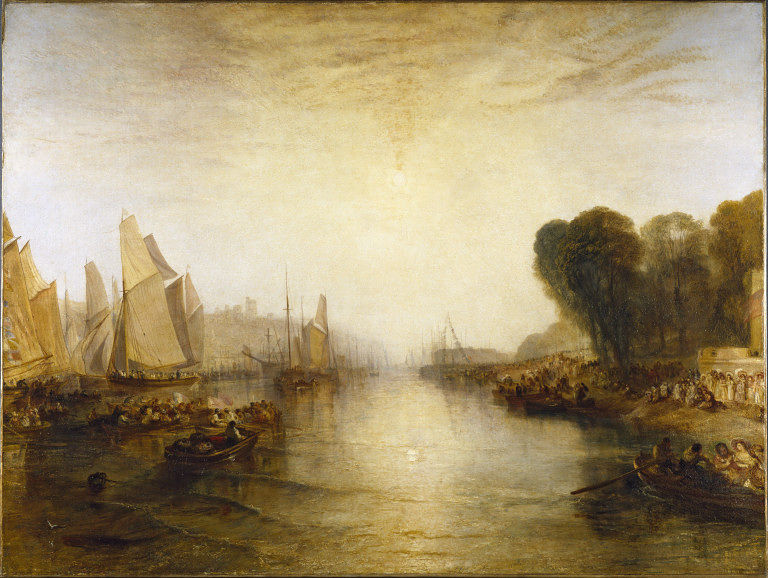