If you would like a larger file, or to use the image in other ways, contact our Licensing team.
BETA
+1
BETA
On display at V&A South Kensington
British Galleries, Room 125, Edwin and Susan Davies Gallery

Tile
1898 (made)
Object Type
Hand-painted tiles became a regular feature of Arts and Crafts interiors from the 1860s onwards. Such schemes were often associated with the revival among architects of the English vernacular, and notably the 'Old English' and 'Queen Anne' styles pioneered by Richard Norman Shaw. The tiles themselves were produced by firms such as those of William Morris and William De Morgan, or were imported from The Netherlands. Larger industrial manufacturers also produced some lines that catered to Arts and Crafts tastes. Fireplaces were the most common setting for such tiles.

Design & Designing
This pattern, with flower heads facing in alternating directions, was probably the most popular of all of De Morgan's tile designs. It was known as 'BBB', after the Norwich firm of Barnard, Bishop and Barnard who made cast-iron fireplaces and supplied tiles for use in conjunction with them.

Materials & Making
De Morgan's technique for transferring patterns to tiles such as these was unusual. The decoration was painted onto a sheet of fine tissue placed on a sheet of glass, behind which an outline of the pattern acted as a guide. The tissue was then fixed face-down onto the surface of the tile, which had been coated with a layer of fine white clay. The surface was then dusted with powdered glaze. During the firing the tissue would burn away and the ash would be incorporated into the glaze. 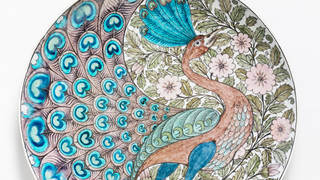 read William De Morgan – an introduction With their vibrant colours and captivating designs, the ceramics of William De Morgan (1839 – 1917) are among the most attractive, recognisable, and enduringly popular decorative arts of the late Victorian period.
object details