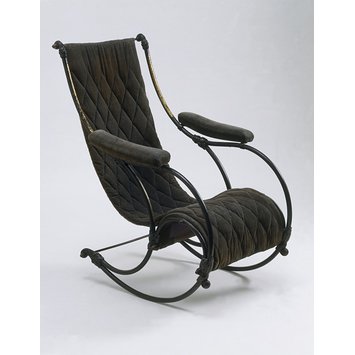 Object Type
Rocking chairs were originally made with curved rockers attached to the feet of ordinary chairs. This unusual type of rocking chair used the curved frame of the chair to create the rocking motion. Examples were produced both in tube metal and in strip metal. The upholstery is slung between the top of the back and the seat, rather like a deck chair.

Time
During the 1840s, iron tube, normally used for beds, was adapted for rocking chairs.

An example,similar to this one was illustrated by John Porter of London in his wire work and iron furniture trade catalogue of 1840. In 1844 Charles Dickens and his wife, Catherine, rented 1 Devonshire Terrace, London, and the inventory of the house included an iron rocking chair in the dining room. An American publication, Thomas Webster's An Encyclopaedia of Domestic Economy (1845), recommended an iron rocking chair for exercise.

People
The original designer and manufacturer of this rocking chair has not been identified. The firm of R.W. Winfield specialised in metal furniture, particularly beds, and between 1827 and 1854 took out several patents relating to the construction of beds and sofas using iron tubing. Their stand at the Exhibition of 1851 included a rocking chair of tubular brass, similar to this one. They showed another example in strap brass at the London International Exhibition of 1862.

This rocking chair has been attributed to the firm of R.W. Winfield, Birmingham, who took out several patents for furniture made of iron tubing, 1827-1851, and exhibited at the London Exhibitions of 1851 and 1862. The rocking chair in the Museum is very similar to that exhibited by Winfields in 1851 but cannot yet be proved to be the example from the 1851 Exhibition. Winfield's chair is visible in a photograph of the firm's stand, illustrated in Reports by the juries on the subjects in the thirty classes into which the Exhibition was divided, London 1852, vol. iii, page 1106 (National Art Library, Ex.1851.82).

There are also examples advertised by other British firms, e.g. Lavertons of Bristol and Coalbrookdale, and by French firms, suggesting that these rocking chairs, the frames of which could be made of tubular or strip metal, were produced elsewhere in Britain and on the Continent.

A rocking chair with a frame of tubular metal is in the collection of Cheltenham Museum and other examples, with the frame made of strips of wrought iron, are in the collections of the Bowes Museum, Barnard Castle, and the Germanisches Nationalmuseum, Nürnberg.

The firm of R.W. Winfield, one of the largest and most celebrated of the Birmingham brassfounders, showed a very similar chair in brass at the Great Exhibition in 1851. However, examples of this design were produced during the 1840s and Dickens owned an iron rocking chair when he lived in Devonshire Terrace, London, in 1844. Though elegant in appearance the chair is in fact too heavy to be practical. The strong and light Austrian bentwood rocking chairs manufactured by Thonet in the 1850s sold far more widely in this country. [Unknown]
ROCKING CHAIR
ENGLISH; about 1851
Iron tubing with lacquered decoration

This chair is similar to one shown by R.W. Winfield of Birmingham at the Great Exhibition of 1851. Later a version in strip brass was produced and shown at the London 1862 Exhibition. [pre October 2000]
British Galleries:
As one of the largest and most celebrated of the Birmingham brassfounders, R.W. Winfield had a large stand the Exhibition. Although such chairs were in production in the 1840s, Winfield still used them in 1851 to promote uses for their new techniques of metal working. [27/03/2003] 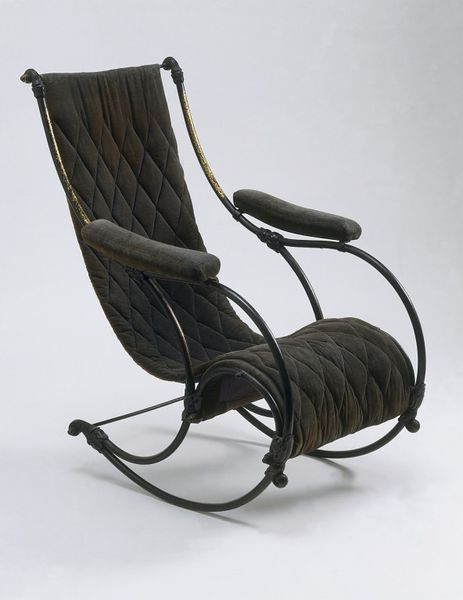