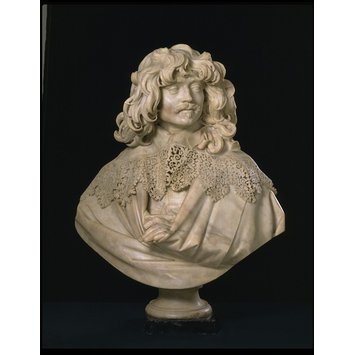 The portrait bust was an ancient Roman sculptural type that was revived and developed in the 15th century, with the growing interest in the representation of the individual. Such images ranged from intimate realism to idealised portraits, and often carried political significance. In 17th-century Rome, numerous busts were produced of popes, prelates and other members of the elite. They were usually intended for public display or propaganda. A description of Gianlorenzo Bernini's working method survives from his visit to France in 1665. He made numerous drawings of his sitters in action so as to get to know their movements and expressions. Working from memory, he then carved the Carrara marble block using chisels and drills. Bernini prided himself on being able to give marble the appearance of flesh. In this bust, the tool marks are particularly visible in the hair and the intricate lace. The bust was apparently completed by an assistant after Bernini was ordered to stop work. Bernini was the leading sculptor in Rome. He worked primarily for the papal court and other heads of state, attaining an outstanding reputation and high status. This bust is unusual because, unlike the majority of contemporary sculpted portraits, it was a private commission from a comparatively modest member of society.

Bust, marble. A young man with a small moustache and beard, his long curling hair tied with a bow of ribbon on the left shoulder; over his cloak and doublet he wears a linen collar with a broad edging of Venetian needle-point lace. The fingers of his gloved left hand emerge from his cloak. The round base stands on a square of black marble which rests on a painted pedestal of wood and composition decorated with garlands.

British Galleries:
Thomas Baker (1606-1658) is believed to have been the Englishman who delivered van Dyck's famous triple portrait of Charles I to Bernini in Rome so that the sculptor could carve a bust of the king. While there Baker commissioned this portrait of himself. As the bust of Charles was an important diplomatic gift, the Pope ordered Bernini to stop work on Baker's bust since this would deflect him from his task. [27/03/2003] 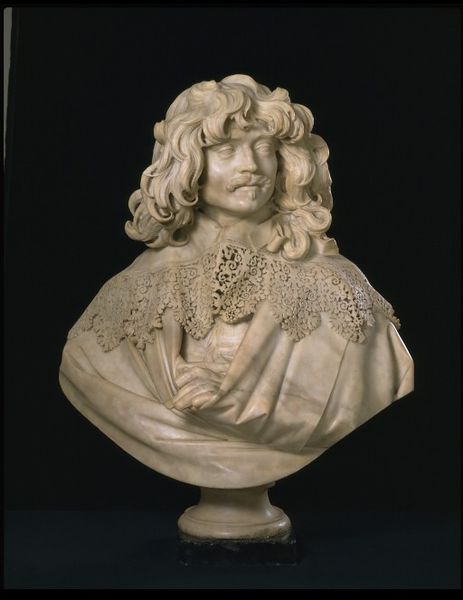