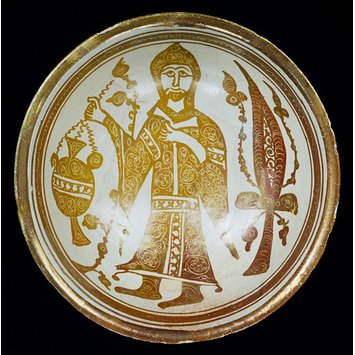 This Egyptian bowl has lustre decoration. It is one of the finest complete examples of the lustre-decorated pottery produced in Egypt under the Fatimid dynasty (ruled 969 -1171). Decorators had transferred the technique of painting in lustre over the glaze from glassware to pottery in Iraq at an earlier date. However, the quality of Egyptian wares of the Fatimid period is often much higher, as in this case.
The decoration on the interior of the bowl shows a hooded man carrying a lamp or censer suspended on chains. The space to his left is filled with a cypress tree. The man has traditionally been identified as a Coptic priest. (The Copts are Egyptian Christians who have lived under Muslim rule since the 7th century AD and still form a substantial minority of Egypt's population.)
The Arabic word Sa'd appears twice, back to front, on the outside of the bowl. It means 'happiness' but is also a common man's name. The same inscription appears on many other Egyptian lustre wares. It is not clear what it signifies. It may be a potter's signature, a workshop mark or the expression of a good wish by the maker for the future owner. Experts have dated this bowl to between 1050 and 1100. This is because a similar item was built into the facade of the church of San Sisto in Pisa, Italy, which was begun in 1070.

Bowl with a high cylindrical footring, convex sides and a slightly out-turned rim. It may be covered with a white slip under a transparent glaze, rather than a tin-opacified glaze. The decoration is painted in reddish-brown lustre, which varies slightly in tone across the bowl, probably as a result of uneven heat in the kiln. The lustre-painting is articulated by scratches through the pigment. Plain concentric bands around the rim frame the central figural decoration, which depicts a hooded man, probably a Coptic priest, carrying a large lamp or censer, while the space to his left is occupied by a cypress tree. The Arabic word Sa'd is written twice, back to front, on the exterior.

By 1050 Egyptian potters were experimenting with a white body material called fritware. On this bowl a Coptic, or Egyptian Christian, priest holds a lamp. Beside him is a cypress tree. Its presence suggests he is standing in a monastery garden, a setting much-loved by Arab poets.

Fritware under a white slip, with lustre over the transparent glaze

Museum no. C.49-1952. Purchased with the assistance of the National Art Collections Fund and the Bryan Bequest. [Jameel Gallery]
BOWL
Fritware painted in gold lustre on a white glaze, depicting a Coptic priest holding a lamp. Signed by the potter Sa'd
EGYPTIAN (Fatimid, said to have been found near Luxor); first half of the 12th century [Used until 09/2000]

said to have been found near Luxor 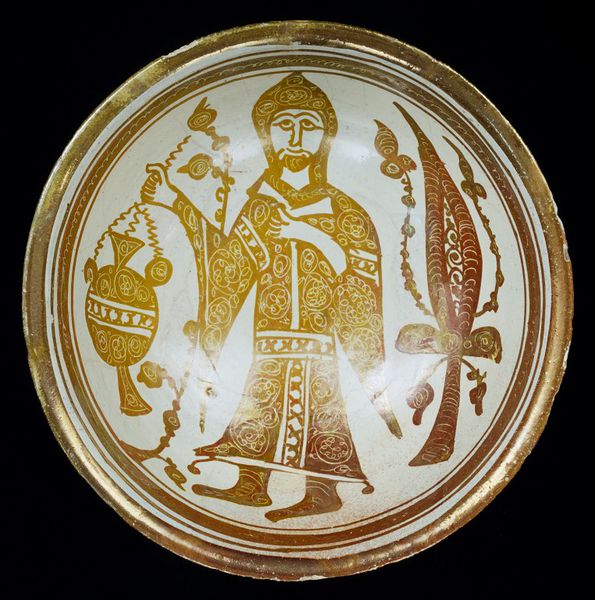