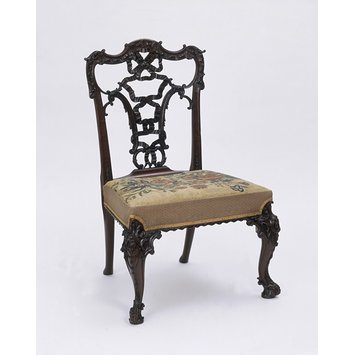 When this chair was bequeathed to the Museum, curators believed that it had been made about 1760. It is based on a design by the cabinetmaker Thomas Chippendale, who became famous when he published his furniture designs in 1754. His book was entitled The Gentleman and Cabinet-Maker’s Director. His designs for elaborate ‘Ribband Back’ chairs were very difficult to carve. They were light and elegant, but not robust. Although the book became widely known, few cabinetmakers made chairs in this particular style in the 1700s. Chippendale designs became fashionable again from about 1860. Many reproductions of ‘Ribband Back chairs’ were then made.

The back carved in highly naturalistic fashion with ribbons, scrolls and flowers, the legs with scrolls; the embroidered seat cover modern.

Raised on cabriole legs with scrolled under foot, supported on a tall circular block overlaid with rocaille motif. The feet are wrapped in lively acanthus, which runs up at the front of the leg to meet a husk pendant below that drops from an elaborately carved cartouche on the knees, centring on a motif derived from a downward facing shell between 2 ‘C’ scrolls, within a broad frame edged with acanthus and ‘C’ scrolls. The outer edges of the legs are moulded, rising to scrolls beneath the spandrels, which are carved with sea-scrolls and acanthus.

The underside of the front and side seat rails has an attached moulding of highly simplified waterleaf.

The back legs are raked and show a rounded rectangular profile with simple pad feet. These continue above rails, raked and tapering, to form the uprights of the back, flaring slightly outwards towards the top. The front faces show a recessed panel between narrow fillets, carved at the base with a rising husk, which is continued as two feint chisel marked quatrefoils. At shoulder height, the uprights bow out slightly and then curve in, flowing visually into the serpentine top rail. This area carved with continuous rocaille sea scrolls and foliage.

The heavily pierced splat is topped by a quatrefoil bow, the tails of which run the full length of the splat, crossing and wrapping round the two elongated ‘C’ scrolls that form its sides. At the base these scrolls rest on two stubby scrolls with the tails of the ribbon ending between them. At shoulder height the top end of the main scrolls are attached to the uprights by ‘C’ scrolls. The shoe, into which the splat locates, is of standard pattern with rising sides and a moulded top edge.

When acquired by the Museum in 1935 as part of the bequest of Mr C.B.O. Clarke, this suite comprising settee (W.64-1935) and accompanying chairs, (Museum numbers W.65, 65A,65B & 65C-1935) were thought to have been made in about 1760, shortly after the design on which they were based was published: Thomas Chippendale, The Gentleman and Cabinet-Maker's Director, 1st Edition (1754), plate XVI, 'Ribband Back Chairs', left-hand design. The Museum later acquired another settee from the set, (W.6-1965). However physical investigation suggested that the set was made in the second half of the 19th century, and in 2015 supporting historical information supporting a date of the late 1850s or 1860s was discovered and published (see references). The suite appears to have been made for a mining engineer and colliery supervisor in Northumberland, John Robinson Liddell (1826-1887) and his wife Hannah Isabella, nee Matthews (1827-1911). It is likely that that the suite was made in Newcastle upon Tyne, possibly for example, by Sopwith & Co.

The chair is illustrated in Coleridge, A. Chippendale Furniture Faber and Faber 1968, figure 178.
A research report by Lucy Wood on ribbon-back chairs is filed in the Furniture Department.
"A Pair of Ribbon-Back chairs after a Design by Thomas Chippendale".
Sent by e-mail to Leela Meinertas by Lucy Wood 01/05/2015
Lucy Wood, 'Tied up in knots: Three centuries of the ribbon-back chair', in Furniture History Journal, Vol.LI, 2015, pp.241-270.

This chair is based on the left hand chair shown in plate XVI of Thomas Chippendale's 'Gentleman and Cabinet-maker's Director', published in 1754. The plate was reprinted in the second edition in 1755 and as plate XV in the third edition of 1762. However, examination of the chair itself suggests that this example, and the three from the same set, were not made before 1850. 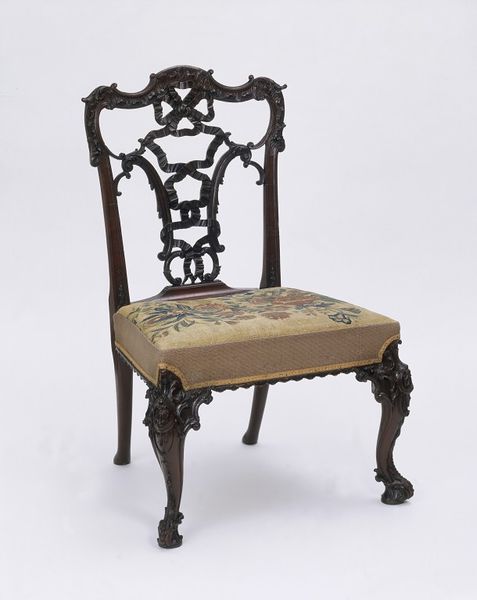