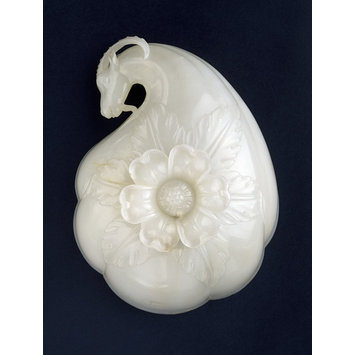 This unique wine cup of white nephrite jade was made for the Mughal emperor Shah Jahan (r. 1628-1658) and is inscribed with his title, Second Lord of the Conjunction. This follows the conventions of royal titulature in the Persian-speaking world, and specifically alludes to Timur, the Central Asian ruler from whom the Mughals were descended. It is dated 1067 of the Islamic calendar, and regnal year 31, which means that it was made in 1657 AD. In the 19th century, the cup was owned by Colonel Charles Seton Guthrie (1808-1875), a renowned collector of Mughal and other hardstones.

White nephrite jade wine cup with lobed body, resting on a flower foot worked in high relief. The naturalistic goat's head recurves towards the body. On the outer wall is a small cartouche giving the titles of Shah Jahan as Lord of the Second Conjunction, the date 1067 and the regnal year 31.

Mughal empire (product of the court workshops, probably in Agra, but possibly in Shah Jahan's new city of Shahjahanabad in Delhi., made)

Made for Shah Jahan, and acquired in the 19th century by Colonel Charles Seton Guthrie. It was formerly in the possession of Mr. R. M. W. Walker, on whose death it was sold by Christie & Co (12/7/1945, lot 146) and passed from the purchasers, Messrs Spink, to Queen Marie of Yugoslavia. It again came into the hands of Spink, who then sold it to a Mr Lazarus, who discovered the inscription and sold it back to the vendors. According to Adrian Maynard of Spink (1991) the museum coloured the inscription on acquisition to make it more obvious 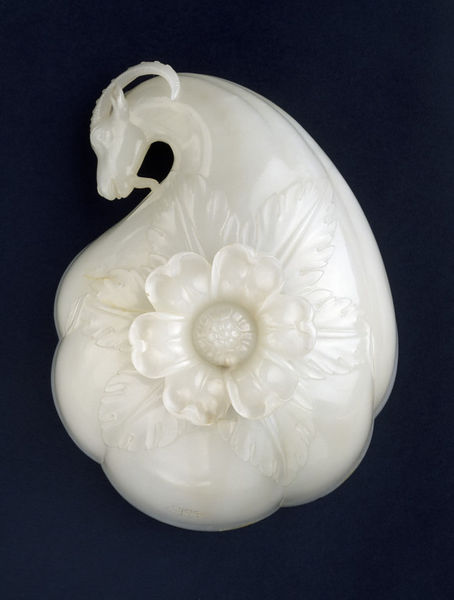