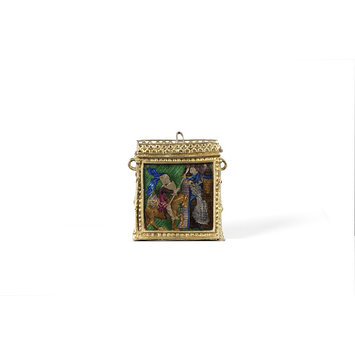 The small scale and exquisite quality of this case suggest that it was a personal treasure intended to be worn around the neck, or suspended from a belt or girdle.It may once have held a tiny book. The enamel images depict scenes from an unidentified medieval romance. One side shows a knight piercing the heart of a Wild Man with his spear, the other shows a knight giving his spear to a lady leaning from the battlements of a castle.Underneath a hairy Wild Man relaxes lying on his back.

A pendant case, of rectangular form, silver, silver gilt and translucent enamels. The top with a balustrade of openwork quatrefoils, the verticl edges of pinnacled buttresses. Each side is inset with an enamelled plaque within a border of punched pellets. A suspension lug at each side, and a loop at the top. The top panel of trelliswork slides to open, and the inscription 'AVE MARIA GRACIA PLE[NA]' is engraved in Lombardic lettering at the narrow sides. The bottom panel is engraved with a reclining wodewose. On one side the rectangular panel with a scene of a knight piercing the heart of a wildman with his spear. On the other side, a scene depicting a knight on horseback before a castle with closed gates.

Historical significance: This object displays scenes from an unknown medieval Romance, which have been linked to the lost Romance of Sir Enyas and the Wodewose. The text of this romance is now lost, however scenes from the story survive in bas-de page illuminations in the Taymouth Hours (BL,Ms Yates Thompson 13) and in the Smithfield Decretals (BL Ms Royal 10E IV). According to the images, Sir Enyas saves a lady from the wodewose who has abducted her, only to be rejected by her for a younger man. The story of Sir Enyas is represented upon other medieval objects. The 1360-68 inventory of Louis, duke of Anjou, notes a hanap, a cup and a basin with themes from this story.

The case depicts two scenes. In one scene, a knight pierces the heart of a wildman with his spear. This may portray Enyas' defeat of the wildman to save the lady. It is unusual that the lady does not appear in the scene as she is present in most other surviving depictions. The second scen depicts a knight on horseback before a castle with closed gates. A lady standing within the fortifications grasps the knight's spear. This scene does not appear to depict any specific scene from what we know of the Enyas story.

A mid 14th century ivory casket in the Metropolitan Museum, New York (17.190.173) juxtaposes imagery of Sir Enyas killing the wildman with Galahad receiving the keys to the castle of the virgins. Perhaps this casket is making a similar juxtaposition using two scenes from different romances. Another possibility is that the scene relates to the attack of the Castle of Love. This motif, popular in medieval art, was altered in the later middle ages to depict wildmen attacking the castle. The possible sexual imagery of the lady grasping the knight's spear, and the crawling wildman depicted on the base of the case may indicate a relationship between the wodewose and this popular love siege scene. It is likely that other stories regarding the Wildman were popular in the medieval period. A panel from a casket in the Louvre depicts romance scenes from a story of Wild men or 'Hommes Sauvages'. The story of Valentine and Orson was another popular Romance including a wild man of the woods.

The wildman was a figure popular not only in secular romance, but also in religious tradition. Saints were sometimes depicted as wildmen and women as a sign of their hermit lifestyle or as a symbol of their previous sins.

This case has some similarities with 16th century girdle book cases of enamel which depict scenes from the bible. These enamelled cases originally held miniature prayer books which were suspended from a girdle or belt. The suspension rings upon this object, its size and the religious inscription may indicate that it was used as a case for a girdle book. The lid at the top of the case slides across, giving access to a cavity large enough for such a book. However, there are no comparative objects surviving as early as the 14th century, the date of this object. The secular imagery depicted on this enamel is also rare. Other possibilities are that the case was used to hold a relic or perfume, although once again there are no comparable objects to substantiate this theory.

The size of the case and the quality of the object show that it was a personal treasure intended to be worn either at the belt or around the neck. It is likely that the box originally had a leather case to protect the delicate enamel images.

CASE
Silver-gilt, enamelled in translucent enamel with scenes from an unidentified romance
Western Europe; c.1330
The details of the armour make a fairly precise dating possible []

Made in England or France 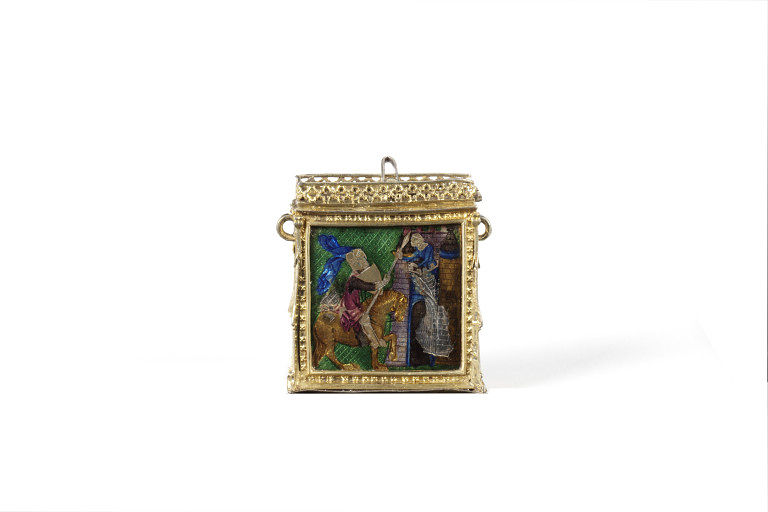