If you would like a larger file, or to use the image in other ways, contact our Licensing team.
On display at V&A South Kensington
Jewellery, Rooms 91, The William and Judith Bollinger Gallery
This object consists of 2 parts, some of which may be located elsewhere.

Collar
800 BC-700 BC (made)
Jewellery is a universal form of adornment. Jewellery made from shells, stone and bones survives from prehistoric times. It is likely that from an early date it was worn as a protection from the dangers of life or as a mark of status or rank.

In the ancient world the discovery of how to work metals was an important stage in the development of the art of jewellery. Over time, metalworking techniques became more sophisticated and decoration more intricate.

Gold, a rare and highly valued material, was buried with the dead so as to accompany its owner into the afterlife. Much archaeological jewellery comes from tombs and hoards. Sometimes, as with the gold collars from Ireland which have been found folded in half, it appears people may have followed a ritual for the disposal of jewellery.

This collar was found in a bog in Shannongrove, Co. Limerick, sometime before 1783. There are at least ten similar pieces from Ireland. We know that some of them come from the lower Shannon area. We do not know what they were used for, but they were probably ceremonial collars. On the inner side of the collar, under each of the circular terminals, is a hole. The collar probably rested on the chest and was held in place by a chain running between the two holes and passing round the back of the neck.

Lieutenant-Colonel C. K. Howard-Bury, D.S.O., D.L., J.P. (1881-1963), was a soldier, politician, botanist and mountaineer. He fought in the First World War, was mentioned in despatches seven times, and taken prisoner. In 1921 he led a reconnaissance expedition to Mount Everest. His homes in Ireland and Tunisia became a meeting place for writers including André Gide, Sacheverell Sitwell, and Dame Freya Stark. 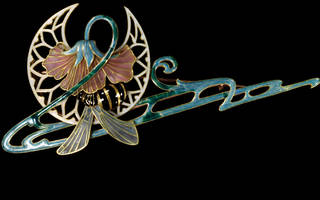