If you would like a larger file, or to use the image in other ways, contact our Licensing team.
BETA
+5
BETA
+3
images
On display at V&A South Kensington
Ceramics, Room 145

1510 (made)
During the Renaissance a distinction was drawn between fine art and the decorative arts. Maiolica painters were regarded as artisans who copied or freely followed printed sources or designs provided by major artists, but some regarded themselves as artists in their own right and signed their work. This dish shows a maiolica painter at work, magnificently dressed and watched by wealthy patrons. It was made at Cafaggiolo, a small potters' workshop set up in the grounds of a Medici villa near Florence to satisfy the needs of its aristocratic owners. It was probably painted by Maestro Jacopo, one of the most skilled maiolica painters of his time, here clearly making a statement about his aspirations as a fine artist and about his noble patronage.
It was once mistakenly thought that the artist shown was Raphael (1483-1520), painting a maiolica dish for his important patrons. 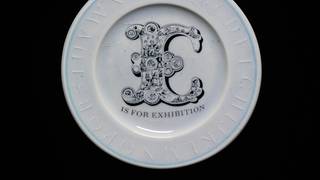 read A-Z of Ceramics As peculiar as some of the pieces themselves, the language of ceramics is vast and draws from a global dictionary. Peruse our A-Z to find out about some of the terms you might discover in our incredible galleries.
object details