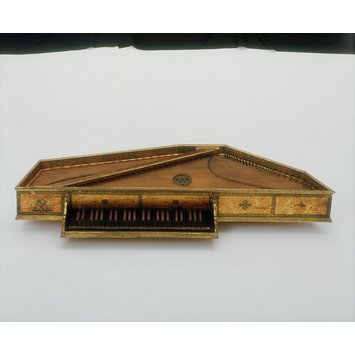 Object Type
A spinet is a small harpsichord with oblique strings. When placed in a box, without legs, it is known as a virginal. The decoration of this instrument, popularly known as 'Queen Elizabeth's virginals' closely resembles a spinet made in 1571 by Benedictus Florianus of Venice (now in the Museum of Musical Instruments in Leipzig). It is lacquered and decorated with Islamic motifs, like other pieces of furniture made in Venice at the time. But the moulding is far closer to that used by Giovanni Baffo, also of Venice. The date 1594 was discovered on the jack-rail of the instrument.

People
The spinet almost certainly belonged to Elizabeth I. It bears the royal coat of arms and the falcon holding a sceptre, the private emblem of her mother, Anne Boleyn. Elizabeth is reported to have played 'excellently well...when she was solitary, to shun melancholy'.

Time
During Elizabeth's reign (1558-1603), some of England's greatest composers flourished, including Thomas Tallis and William Byrd. At the time, the best spinets came from Italy, particularly Venice. Spinets were considered more ladylike than lutes, as the player had less risk of developing rounded shoulders.

Place
The spinet was almost certainly imported from Venice but it cannot be associated with any specific royal palace. Having left the Royal Household soon after the death of Elizabeth, it resurfaced in 1798 at Fisherwick Park, Staffordshire.

1594
This inscription is scratched on a blue paint layer abvoe the far righth end of the jackrail. It was descovered in 2002 by Nanke Schellmann, V&A Furniture Conservation.

The end of the sixteenth century was the golden age of English music, which owed much to the patronage of the Royal House of Tudor. It is related that Henry VIII ‘exercised himself dailie in plaieing at the recorders, Flute, virginals, setting of songes in making of ballades'. His daughter Elizabeth was no less accomplished. Her skill on the virginals is recorded in the account of her interview with Sir James Melville, who states that ‘placing himself by the tapestry that hung before the door, entered within the chamber, and stood a pretty space hearing her play excellently well’.
Possibly this instrument was the one on which the Queen played in the hearing of the Ambassador. It has been long known as ‘Queen Elizabeth’s Virginal' in accordance with the general English custom at this time of calling keyboard instruments virginals, but is more accurately described as a spinet. The shape, the style of decoration, and the presence of an outer case proclaim it an Italian instrument dating from about 1570, though the possibility that it was actually decorated in England by an immigrant craftsman is not to be excluded. Amid the elaborate decoration, the Royal Arms and the crowned falcon (the device of Boleyn) conﬁrm its association with the Queen.
The history of the instrument can be traced from the end of the eighteenth century.
It was bought by the Museum in 1887

p.7 Notes that the instrument was once attributed to Floriani on the basis of its decoration resembling that of the 1571 instrument in Leipzig, but that it has been re-attributed (with qualification) to Johannes Antonius Baffo by Denzil Wraight on the basis of its mouldings. [Ralph Denzil Wraight, ‘The stringing of Italian Keyboard Instruments c.1500–c.1650’, PhD Dissertation, Queen’s
University of Belfast (Ann Arbor: UMI, 1997), vol.2, p.50 (W299)]
PATEY, Carole and Moira Hulse: Musical Instruments at the Victoria and Albert Museum. (London, HMSO, 1978), p. 4-5

British Galleries:
The painter decorated this spinet with the Queen's devices, including the falcon, the sceptre and the royal coat of arms. Elizabeth inherited the sceptre symbol from her mother, Anne Boleyn (about 1501-1536). Several contemporaries recorded that she was an excellent keyboard player and it is possible that she played on this very instrument. The painting illustrated shows Elizabeth dancing with Robert Dudley, 1st Earl of Leicester (about 1532-1588). [27/03/2003]

The instrument bears a similarity to a virginal by Benedictus Flrianus in Leipzig, dated 1571. However, the researches by Denzil Wraight, and comparisons of mouldings on Baffo instruments point to an attribution by Giovanni Baffo. 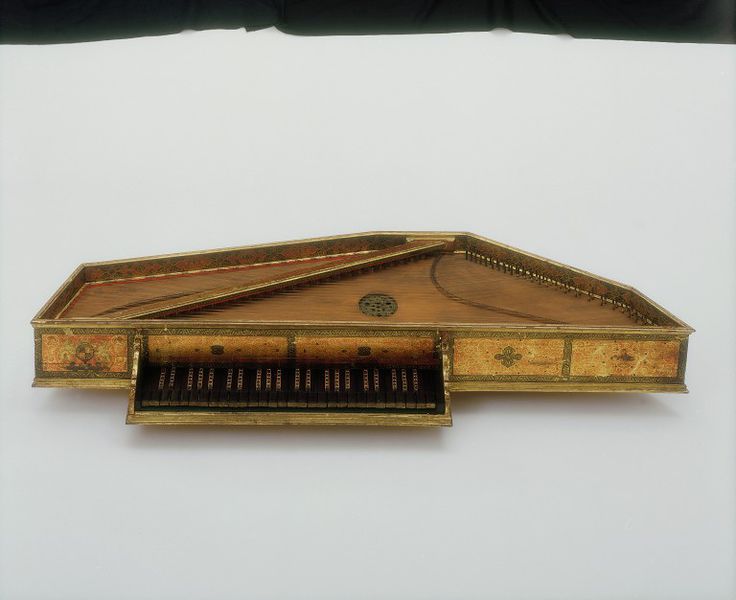