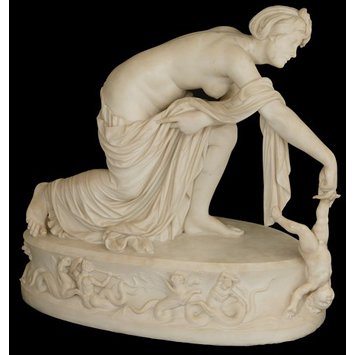 In Greek mythology Achilles was the son of Thetis, a sea-nymph. Here Thetis is shown dipping the newly-born Achilles into the river Styx, in the hope that the river's magical properties would protect him. Achilles became a legendary hero, but was killed by an arrow to his heel, the one part of his body left vulnerable.

This group was commissioned by Colonel Thomas Johnes and was originally displayed in his magnificent conservatory, at Hafod, Cardiganshire. Marine symbols are depicted around the base. The heads of the figures are portraits of Johnes's second wife Jane, and their infant daughter Mariamne. The plinth on which the sculpture sits is almost certainly original; interestingly it incorporates a cupboard. At a later date the original mahogany surface was given a painted marbled finish; one panel of this has been retained as a record of this later finish.

Thomas Banks (1735-1805) was apprenticed to a London mason, but also spent time working alongside the sculptor Peter Scheemakers (1691-1781). He enrolled in the life classes held at the St Martin's Lane Academy, and later at the Royal Academy Schools. In 1772 he became the first sculptor to win the Royal Academy's three-year travelling stipend, and went with his wife to Rome, where he eventually spent seven years. He specialised in ideal works, most of which were executed in Rome for British patrons, and he continued to produce similar work after his return to London. He was made a Royal Academician in 1786. Banks was one of the most original British neo-classical sculptors, infusing his work with the antique spirit rather than to a superficial classical style. He tried to establish a market for modern gallery sculpture, made specifically for individual patrons, as seen in the present sculpture.

Statue group of Thetis kneeling over Achilles whom she holds upside down by one leg. It has natural markings of black spots on the left shoulder and side of Thetis.

This object was commissioned by Colonel Thomas Johnes of Hafod. The heads on the sculpture are those of his wife and infant daughter. It was bought with Hafod House by the Duke of Westminster in 1833 and then by Mr Charles Bell; descendant of the artist; and presented to the V&A.

The group, which survived a fire that destroyed much of Hafod on 13 March 1807, remained at Hafod and formed part of Johnes's estate, which was acquired by the 4th Duke of Newcastle in 1833. It had been removed to Clumber House, home of the Duke of Newcastle by 1845, and was included in the Clumber House sale, held on 19th October 1937, lot 337, held by Messrs Christie, Manson and Woods, London. Purchased at the sale for £80 by Cecil Keitch and Kerin, 4 Bruton Place, London, who acted as agents for the Museum in bidding for the piece. Charles Bell - a descendent of the sculptor - who originally offered to pay up to £50 to secure the figure for the Museum, in the event paid the full amount of £80 in order to present it to the Museum. The original octagonal wood pedestal was almost certainly acquired with the marble. Mrs Forster had written to Allan Cunningham in 1830 describing it as 'placed over a magnificent vase in the conservatory'; this suggests that the wood pedestal was made slightly later. 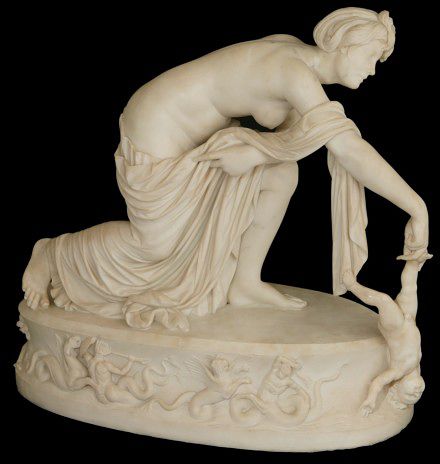