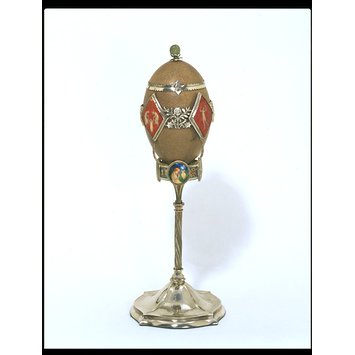 Object Type
A chalice is a wine cup used in the performance of a mass. Here the term has been used rather loosely to refer to the silver cup set within the emu egg with the top cut to form the cover. The tradition of mounting exotic, natural materials in elaborate gold, silver and jewelled or enamelled mounts dates back to the Renaissance.

Subjects Depicted
The enamel plaques illustrate the classical myth of the rape of Persephone or Proserpine, the daughter of the harvest goddess, Ceres. One day, when gathering flowers in a meadow with a companion, Proserpine was observed by Pluto, the king of the underworld. Overcome with sudden lust, he swept her up in his chariot, caused a great chasm in the earth to open before them and carried Proserpine to his kingdom below. The myth also tells of Ceres's subsequent wanderings in search of her daughter and Proserpine's return to earth each year in the spring. Hence the inclusion of spring flowers and insects in the decoration of the enamel panels.

People
The enamel work, backed with foil on copper was executed by Phoebe Anna Traquair. Phoebe Traquair (1852-1936) was a mural decorator, enameller, illuminator, painter and embroideress. Born in Dublin, she received her artistic training at the Dublin School of Art. She moved to Edinburgh in 1873 when she married Ramsay Traquair, Keeper of the Edinburgh Museum of Science and Art. The silver mounts were made by Henry Tatton who was in partnership with J.M. Talbot.

An emu egg cup with cover, mounted in a decorative silver setting, set with four plaques in enamel with foil on copper by Phoebe Traquair, the silver setting by Henry Tatton. The enamelled plaques show the story of Persephone, her capture and imprisonment in the Underworld and her return in the spring. The decorative enamel motifs represent spring flowers and insects.
The upper part of the egg is sliced off to form the cover, two scalloped border mounts, hinged and with a clasp. Green stone finial. The main part of the egg is annulated with a band formed of four lozenge shaped enamels in scalloped panels, two each of a pomegranate, star-shaped flowers and leaves, and two of one scrolled-winged grotesque swallowing another.Three scrolls with pelleted spines join the base of the lozenges to a collar below the egg, supported on four wire clusters radiating from the stem. The collars are enamelled with flowers and insect motifs between four applied enamelled roundels in scalloped silver mounts. A twisted stem with a capital above and a shaped base below rises from a shaped and domed base with four lobes.
The top unscrews from the bottom at the junction of the clustered wires and the capital.

edge of foot: Edinburgh mark for 1915, maker’s mark H.T. (according to the Edinburgh Assay Master, Mr. F. Leslie Selfe, in a letter dating 14 January 1977, this is the mark of Henry Tatton, “Father of the present deacon of the incorporation of goldsmiths of the city of Edinburgh” Mark of Henry Tatton

The emu egg may have been brought to this country by Phoebe Traquair's daughter-in-law Beatrix Nairn Traquair (1879-1960), a New Zealander from Hawkes Bay.
Designed and executed in part by Phoebe Anna Traquair (born in Dublin, 1852, died in Edinburgh, 1936)
Maker's mark H.T, probably for Henry Tatton, Edinburgh, who made the mounts
Made in Edinburgh

"H V Bartholomew Gift
Label: Phoebe Tracquair was a prominent member of the Scottish Arts and Crafts Movement. She practised as a mural decorator, enameller, illuminator and embroideress. Born in Dublin and educated at the Dublin School of Art, she moved to Edinburgh on her marriage. Some of her furniture and metalwork was designed in conjunction with the famous Scottish architect, Sir Robert Lorimer. She exhibited extensively in Europe and the United States and was awarded medals at the London, Paris and St Louis International Exhibitions." 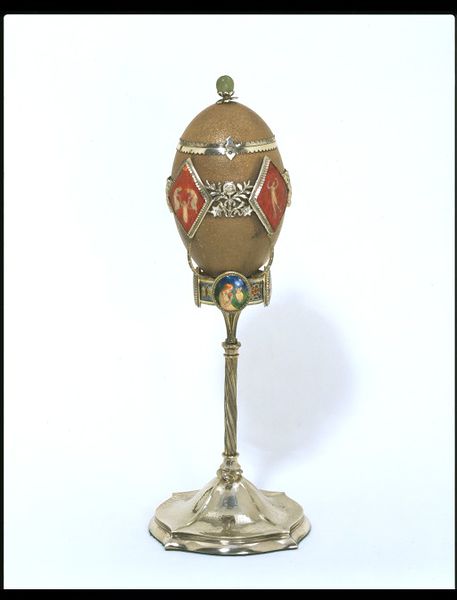