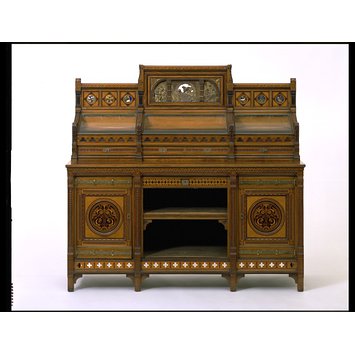 This cabinet was designed by B. J. Talbert (1838-81) and made by Holland and Sons for the Paris International Exhibition of 1867. It is mainly made of walnut with other woods inlaid. The carved decoration, for example on the cupboard doors, is in the Reformed Gothic style which was popular in the second half of the nineteenth century. This involved taking motifs more commonly carved in church stonework and woodwork, and applying them to wooden furniture.

The cabinet is also decorated with six enamel plaques depicting different birds. These are arranged in groups of three either side of a central image in metal of the ‘Sleeping Beauty’ based on Alfred Tennyson's poem The Day Dream.

Talbert was a Scotsman who originally trained as a carver before working as an architectural draughtsman in Glasgow. He subsequently became a prolific commercial designer of furniture, metalwork, stained glass, wallpapers, textiles and carpets. He also produced several influential publications including Gothic Forms applied to Furniture Metalwork and Decoration for Domestic Purposes which had a big impact on the way in which the revived Gothic style was used in domestic design.

Made from walnut wood, carved and inlaid with other woods, electrotype panel, and enamel plaques. The electrotype panel represents the story of the Sleeping Beauty from 'The Day Dream', a poem by Alfred, Lord Tennyson.

Walnut and other woods, electrotype and enamels

Designed by Bruce James Talbert and made by Holland and Sons, London for display at the 1867 Exposition Universelle. Details of the furniture made by Hollands for the Exhibition, including this cabinet and a reference to Talbert's involvement, are in the firm's Day Book, 1867 K-Q, beginning on p. 697, in the Archive of Art and Design. The cabinet was described as 'An inlaid walnut wood Cabinet suited for Gothic furnishing - relieved by enamelled discs and subjects in silver deposit modelled from Tennyson's Day-dream.' The next item was 'A chair in same character with stuffed seat covered in velvet.' Figures in the column 'sell for' suggst that the cabinet was priced at £200 and the chair at £8 10s. Annotations at the end of the Paris 1867 list indicate that the firm valued the cabinet at £100 and the chair at £4 10s.

Talbert was a Scot who originally trained as a carver and became a prolific commercial designer of textiles, wallpapers, metalwork, stained glass and furniture. His influential book, Gothic Forms Applied to Furniture, Metalwork and Decoration for Domestic Purposes was published in 1867 and popularised his designs for furniture in the Reformed Gothic style, using geometric inlay, chamfering and stumpy columns.

Another cabinet, made of rosewood and decorated with scenes from Tennyson's poem, The Princess, was exhibited by Henry and John Cooper of Great Pulteney Street, London, at the Paris Exhibition of 1878 and is illustrated in the Exhibition catalogue, p. 46.

Walnut, carved and inlaid, with enamel plaques and electrotype panel of Tennyson's Day-dream; designed by B.J. Talbert and made by Holland & Sons, British 1867. 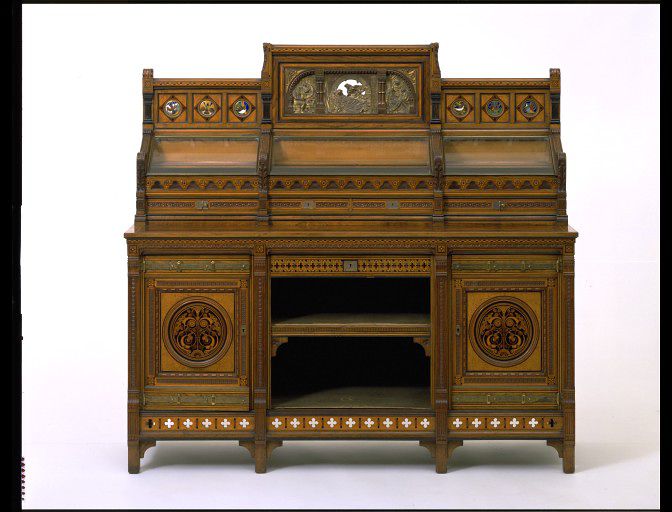