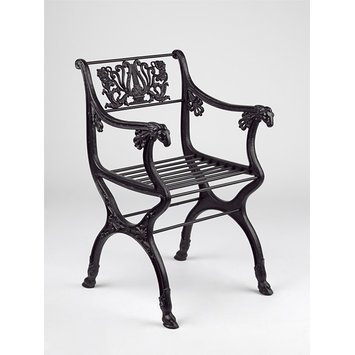 From the late-18th century Prussia sought to build up its cast-iron industry and by the 1820s was producing a wide range of objects, from columns and railings to small-scale ornaments.

The royal architect Karl Friedrich Schinkel was particularly interested in the material, which allowed the mass production of quite complex decorative ornament. He also had a professional interest in promoting the royal iron foundries in Berlin and elsewhere. In about 1825 he produced his first designs for cast-iron garden furniture for the gardens of the Prussian royal palaces.

This chair is based on a design of about 1835 for the Römischen Bäder (a garden pavilion known as the Roman Baths) in the gardens at Potsdam. The design was produced for about thirty years by foundries all over Europe, with slight variations in the detail of the back, arms and feet. Without archival evidence, it is very difficult to date such chairs precisely.

A cast-iron armchair, painted black. The two side panels are cast in one piece each, with X-shaped legs cast in one piece with the back strut and the curved armrests, which have moulded sheep's head arm ends. The legs terminate in hooved feet. The two sides of the chair are connected by cast iron rods. The chair back has two rods serving as top and bottom rails, between which is a cast-iron pierced lyre-and-scrollwork motif. Nine closely-spaced rods connect the side-rail sections to create the flat seat. Two rods act as front and back stretchers connecting the legs of the chair.

Cast iron. Casting-lines are visible down the legs and arms. The support rods have been riveted through.

Chair has been repainted at least twice. When it was acquired it had been inappropriately repainted white and so it was decided to repaint it matt black as a historically appropriate colour. While black is the likeliest colour this chair could have been originally, it might also have had a painted bronze-effect finish. However, no base-paint evidence was found to indicate the original colour of this chair.

Berlin (city) (designed)
Berlin (possibly, although the model was cast in a number of foundries from The Netherlands to Bohemia., made)

This garden chair was cast to a design by the architect Karl Friedrich Schinkel, who first produced the design in about 1835 but with a variation in the design of the back panel.

The design is based on the standard form of chairs at the time, with a high, horizontal back support that curves backwards. The form of the side pieces, with legs crossing in an x-form, is a classical form. It was a form that Schinkel had used in 1825 for a design for an armchair for the study of the Crown Prince Friedrich Wilhelm (IV) in the Berlin Schloss (see catalogue of an exhibition, Karl Friedrich Schinkel 1781-1841. Staatliche Museen zu Berlin, 1980-1981, cat. 355, p. 228).

Schinkel was extremely interested in industrial processes and the application of art to them. An iron foundry had been established under royal patronage in Gleiwitz in Silesia in 1796 and another in Berlin in 1804. Schinkel, as chief architect of the Department of Building Works of Prussia from 1806, sought to promote the use of cast-iron in buildings in every way possible. After the expulsion of Napoleon in 1815,an extensive building programme started in Berlin, giving him scope to design to this new material. By the mid-19th century cast-iron was one of the most important industries in Prussia.

In 1826 Schinkel visited France and England and visited many workshops and factories as well as the more usual tourist sites. He may have seen examples of iron garden furniture in England and it is about the time of his visit that his first designs for such furniture appear, in the form of a bench for the Römische Bäder (a garden pavilion known as the Roman Baths) in Potsdam and for the surrounding gardens. These early benches had wooden or marble seats on iron frames.

This chair, however, is based on Schinkel's most successful model, created in about 1835 for the Roman Baths. This chair, unlike earlier models, was incorporated into the general production of a number of Prussian foundries and foundries in the Netherlands, Switzerland and Bohemia. The details of the back panels might vary but were based on Schinkel motifs such as the lyre and scrolling foliage. The chairback design could be multiplied to produce the design for a bench. In some of the versions the feet and ends of the arms were simplified into scrolls. Versions could differ quite markedly from Schinkel's design in details. Heinrich Kaehler (1804-1878) designed a bench version, with double cornucopia in the back panel and more elaborate scrolling of the panel between the legs for the iron-foundry that he took over in 1846 from his brother at Güstrow, Mecklenburg, Germany. Heinrich Kaehler had trained as a sculptor and spent time in England, but returned when his brother died. Two such benches were sold by the Grisebach auction house, Berlin, 1 December 2016, lot 313.

In this chair design Schinkel had explored the physical properties of cast-iron to create what was a visually (though not physically) light version of an indoor chair. The side pieces are of I section, lessening their weight while retaining their strength. Unlike the earlier chairs, this has a seat of iron rods, which would allow rainwater to run through. The history of this model is described by Georg Himmelheber in 'The Beginnings of Cast-iron Garden Furniture Production' in Cast Iron from Central Europe 1800-1850, the catalogue, ed. E. Schmuttermeier, of an exhibition held at the Bard Graduate Center, New Yorkk, 1994, pp. 92-94.

This chair was purchased by the Museum in 1986 with no prior history (RF 86/1275). At that time it was painted white. The paint was removed by the Museum and the chair re-painted matt black. Such garden furniture in England in the 19th century might be painted to imitate bronze or patinated bronze. In Germany matt black was often used to finish cast-iron.

A cast-iron armchair, the two side castings each showing front and back legs linked in x-form, the sweeping arms ending in rams' heads, the feet as hoofs. The two castings are linked by iron rods forming a high back panel and the seat, with two rods acting as cross-stretchers between the crossing sections of the x's. The back panel is set centrally with a casting of a lyre forming the central section of an anthemion, against symmetrical scrolls of acanthus.

The architect Schinkel designed several pieces of cast-iron furniture for the Berlin cast-iron industry, famous for its fine quality. These were at first used in the parks of the royal palaces at Berlin and Potsdam, but remained in production up to about 1860. [1987-2006]
Europe and America 1800-1900, room 101

The chair is part of a range of cast-iron furniture designed for the royal gardens in and around Berlin. Its black finish and high quality casting are typical of the ironwork produced in northern Germany in the 19th century. Schinkel, official architect to the King of Prussia, was a versatile and innovative designer who encouraged professional training for others. [2006]
Garden armchair
About 1835
Karl Friedrich Schinkel (1781–1841)

In sand casting a carved wood model is pressed between two frames packed with fine, damp sand. The model is then removed and molten metal poured into the cavity. Here, the two side panels and the openwork back panel were individually cast, then assembled using wrought-iron rods fixed by hammering the ends. [01/12/2012] 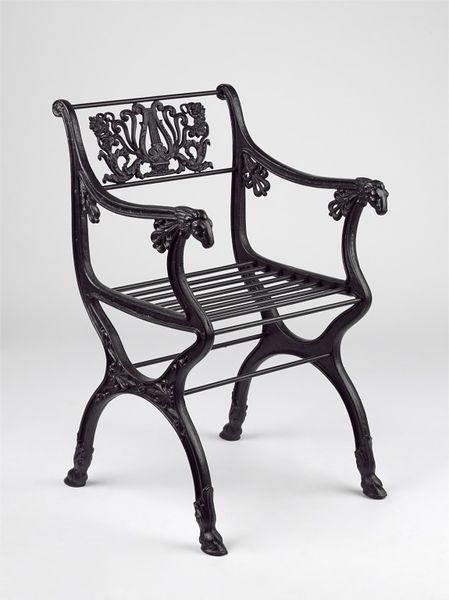