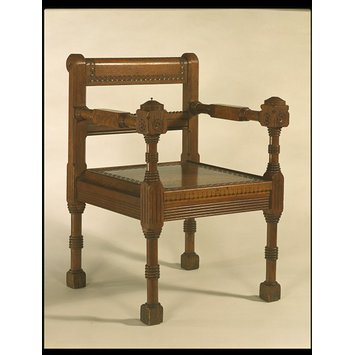 This substantial chair was one of a set designed for the boardroom of the Pennsylvania Academy of Fine Art by the Philadelphia-based architect and designer Frank Furness. Furness, along with his partner George Hewitt, was responsible for the design of the entire building. Following the practice of Gothic Revival architects in Britain, Furness often involved himself with the design of furniture for his new buildings, as well as producing drawings for light fittings and stained glass. His furniture was strikingly robust and architectural in character. The combination of turned columns and square blocks on the legs, arms and uprights of this chair echoed the motifs used on the building itself. The interior stonework of the building was decorated with shallow, incised ornament, similar to the rosettes on this chair. The design of this chair is very practical for such a public space. There is no easily damaged inlay or deep carving, and no upholstery to wear out. Instead, Furness merely hints at upholstery with the incised 'braid' that outlines the seat and the main back panel.

Armchair of oak with turned and carved decoration, the wooden seat and back with shallow carved decoration in imitation of upholstery.
The armchair is raised on four legs, without stretchers. Each is turned, above a square, block foot, the turning ornamented with plain collars, those immediately beneath the seat rail graduated in size to form a stylised capital. The seat rails are reeded on the outer edge for a depth of about 3 cm. Above this, the side and back rails rise plainly for 2 cm and then curve inwards to form a shallow, raised framing, with rounded top, around the seat. On the front rail, the plain area is surmounted by an outset section, notched with lines to suggest a row of hanging lappets or fringing, but with no raised frame to the seat. The top surface of the seat is formed of two planks of oak, butt-jointed about 10 cm from the back. The seat is carved with a continuous frame inset with quatrefoil flower heads, the frame about 3 cm wide and set 1 cm in from the edge of the seat all round. On the back the legs continue upwards to form the stiles of the back, square in section and stop chamfered, the area of junction with the seat rails not chamfered but decorated on the two outer surfaces with three shallow carved stylised flutes. The top of the stiles are extended to the back with a half circle of wood, suggesting a tight scroll of the back uprights. The outer faces of these scrolls is carved in the shallow with a rosette. The front legs continue upwards to form the arm supports, with a similar 'fluted' section at seat rail level. Above this they are turned and ringed in a variant of the leg decoration and are surmounted by a large cube of oak, the vertical edges notched, the sides and front carved with recessed rosettes. Above each block is turned a shallow roundel, the edges each with 3 'reeds', the top surface rising in a shallow ogee to the centre, where a small turned knop sits within a turned recess. The small finial to each of these has apparently been broken off The arms each show a turned and ringed section to the front and back of a plain, rectangular arm pad, with chamfered corners. The mid-rail of the back is rectangular, the front face stepped in section, the top carved with a row of half beads in high relief, the lower edge carved with a single reed, the back edge of the rail reeded like the seat rails. The top rail of the back is of rectangular section, the upper edge rounded to follow the curve of the top 'scrolling' of the uprights. It is carved with a smaller version of the rosette 'braid' framing the seat.

This chair was designed by Frank Furness as one of a set for the Boardroom of the Pennsylvania Academy of Fine Art. Furness and his partner, George Hewitt, had submitted plans for the building in 1871 and building continued from 1872 to 1876.

Armchair of oak, with turned and carved decoration

'Recent acquisitions of furniture and woodwork at the Victoria and Albert Museum'. Burlington Magazine June 1993, vol. CXXXV, no. 1083, pp. 443-448. This item illustrated as item VII.

The turned uprights of this chair are Greek Revival in style, but its robust form recalls British 'Reformed Gothic' design of the mid 19th century. The chair comes from a set designed for the boardroom of the Pennsylvania Academy of Fine Arts, the first major project that Furness undertook.

This chair is one from a set designed for the Boardroom of the Pennsylvania Academy of Fine Arts, the first major project by Furness and his then partner George Hewitt. The Academy is a combination of French architecture, Gothic detailing and Ruskinian ornament, based on a literal approach to the study of nature. The chair shows Furness' command of Neo-Grec forms while also being reminiscent of British Reformed Gothic from the 1850s and 1860s. [1987-2006]
Europe and America 1800-1900, room 101

The turned uprights of this chair are Greek Revival in style, but its robust form recalls British 'Reformed Gothic' design of the mid 19th century. The chair comes from a set designed for the boardroom of the Pennsylvania Academy of Fine Arts, the first major project by the architect Furness and his then partner George Hewitt. [2006] 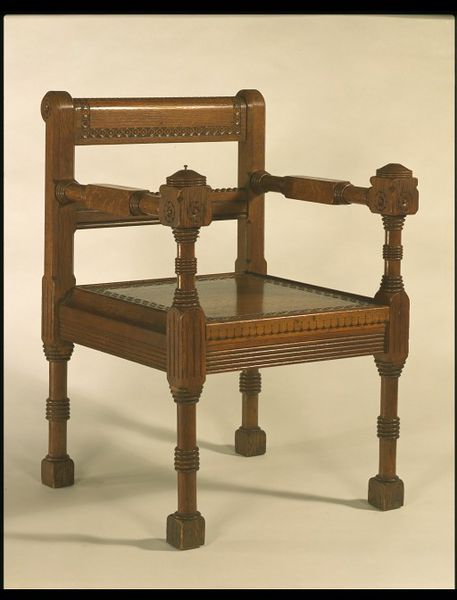