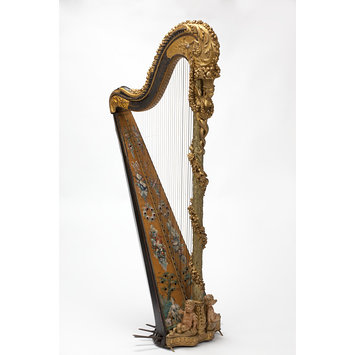 Jean-Henri Naderman (also spelt 'Nadermann') was born in Fribourg , Switzerland, in 1735 and died in Paris in 1799. In 1778 he was appointed facteur de l' harpe ordinaire or harpmaker in ordinary, to Queen Marie-Antoinette of France (1755 - 1793). The queen played the harp and helped make it hightly fashionable in the salons in Paris, which would help explain why there were as many as fifty-eight teachers of the harp in Paris by 1784. In such surroundings, lavishly decorated examples like this one would have been highly appropriate and desirable. This instrument is fitted with crochettes, right-angled hooks, which were operated by foot-pedals and raised the pitch of each string by one semi-tone, a popular device during this period.

On loan to the Horniman Museum.

Back of seven ribs painted black, with a border of simulated gold beads. Pine belly painted with swags of flowers, musical trophies and a shepherdess in a landscape in the Boucher style. Garlanded pillar richly carved and gilt, with a winged mermaid at the top, whose formed tail is plaited down the front of the pillar. At the base, two triton-babies blowing horns: they have gilt tails, but their bodies and faces are a natural skin colour. The neck is also richly carved with floral scrolls and gilt. The plate covering theb ling rods of the mechanishm is missing. Single action by crochettes.

'JH.Nadermann / à Paris'
H.Nadermann in Paris.
Anthony Baines, in Catalogue of Musical Instruments in the Victoira and Albert Museum (London, V & A Publications, 1998), pp. 79 - 80, refers to H.Nadermann, but the initial on his printed label found on the inside of a harp (Museum No. 425-1884) is a mongram made up of a dotted J and an H. The spelling ranges from 'Naderman' to 'Nadermann'.

This instrument was bought by the South Kensington Museum for £4 - 10 - 0 (£4.50). Its previous provenance remains unknown.

Jean Henri Nadermann (1735 - 1799) was appointed harp maker to Queen Marie Antoinette of France in 1778. In collaboration with the harpist J.B.Krumpholtz, Nadermann worked on a series of harps with improved resonance, a version being played by Krumpholtz's wife before the Académie des Sciences in Paris in 1787.

The harp had a single action by "crochettes" . Hooks, placed near the tuning pins and activated by the pedals, nipped the string and shortened the playing length enough to raise the note by a semi-tone. 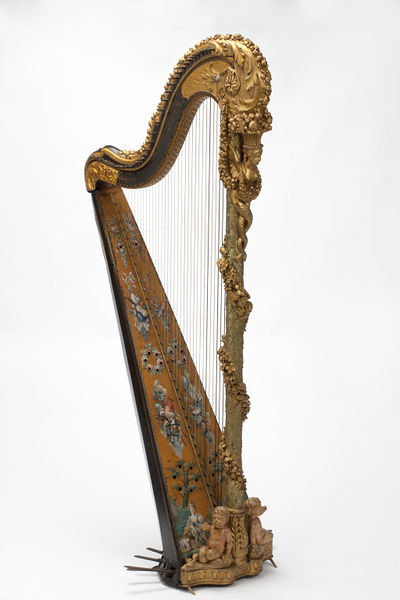