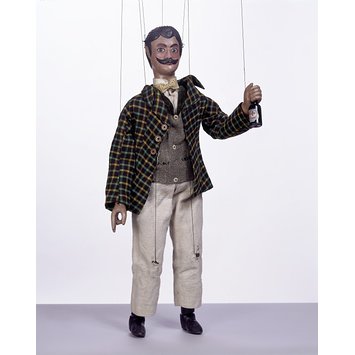 The figures were carved, painted, dressed and performed by members of the company. This is a man-about-town or a 'masher' who would have been a stock character, used in any play requiring a young villain. His carved moustache, and the beer bottle with an eyelet in the top so that it could be drawn to his lips for frequent drinking, indicate that he was a character 'up to no good'. His right hand is carved closed to hold a prop, such as a gun.

Carved wooden marionette; a young middle-aged man or 'masher' with a carved full moustache, painted black; black painted carved hair, and a painted pink complexion. He has brown glass eyes. He wears cream brushed cotton trousers (possibly formerly a cot sheet); a green and white tweed waistcoat with green velvet trim, and a green, white and yellow checked tweed jacket. His feet are painted black. He has a tucked shirt (possibly original, due to the tucking) and a yellow bow tie. His right hand is closed, and he brandishes a beer bottle in his left hand. There is an eyelet in the top of the bottle for bottle-to-mouth movement, and there are two small eyelets at the sides of the jaws and ears, suggesting a possible former use as a trick figure, or for a special movement such as pulling up both arms in shock/horror!

Wooden oval yoke, hollow for the neck joint, and an oval wooden pelvis. Legs are attached by cotton tubes, tacked on, and the lower legs have tongues to upper legs for the knee joints, also wooden ankle joints allowing good flexibility.

Two control bars; bar 1of five notches, bar 2 of two notches, with later screw eyes for fixing the bars together and for run- through hand strings.

Carved wooden marionette from the Tiller troupe. Stock character representing a young middle-aged man or 'masher' brandishing a beer bottle. Made by the Tiller family circa 1870 to 1890.

It is impossible to identify the precise maker of this marionette since the company made, altered and used figures throughout its career. It is possible, however, to distinguish distinct types, and therefore groups, made by different makers, due to the type of carving. The carver of this object has been distinguished as Maker B because of its standard sized head. 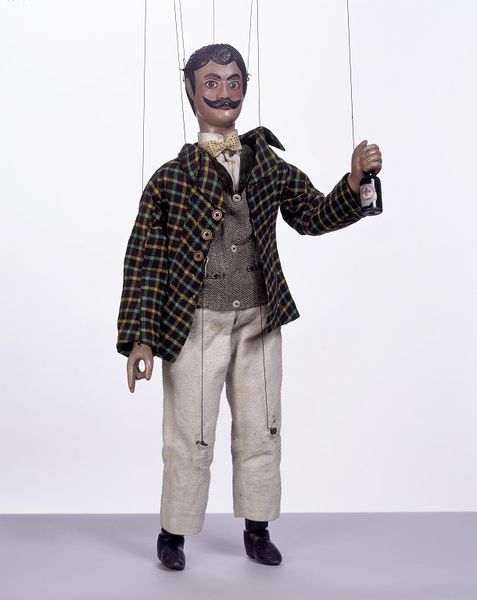