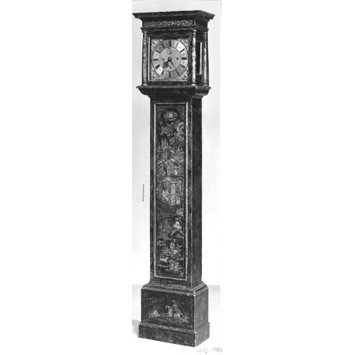 Joseph Knibb was one of the ﬁnest English clockmakers of the 17th century. He worked in Oxford from 1662, moved to London in 1670/71 and worked in Seargeant’s Inn, near Fleet Street, at the Dyall and later at Charing Cross. In about 1690 he moved out to Hanslope in Buckinghamshire.
The earliest surviving English japanned clock case surrounds a bracket clock by Joseph Knibb, dated 1672-4, now in a private collection. Japanned cases became more common in the early 18th century, so this is another early example, although it was redecorated in the early 20”‘ century. The simulated tortoiseshell ground is particularly unusual. The plinth has an added lower base in place of the original bun feet.
The movement is correct for a late Joseph Knibb clock - a brass and steel weight-driven two-train movement, with count wheel, striking on two bells. The dial is not typical of Knibb's practice and may have been made after he left London by one of his former workshop assistants. The chapter ring has the hour four engraved as IV instead of IIII which indicates the ‘Roman Striking‘ system. Two bells of different tone are used. The hours one to three are struck on the lighter bell, four is struck as one light bell followed by one deep bell, five is struck as one deep bell, six as one deep bell followed by one light bell (VI). This method is found on longer duration clocks as it reduced the number of strikes made every day.

Dial:
10-inch square brass dial with silvered chapter ring having Roman hour numerals and arrowhead half-hour divisions. Owing to the presence of Roman striking, four is engraved as “IV”. The minute chapter has divisions for each minute and Arabic numerals in every five, whilst the inner portion of the chapter ring is engraved with hour and half-hour divisions. Around “VI” on the chapter ring is engraved Joseph Knibb London. Separate, silvered subsidiary seconds ring below twelve with Arabic numbers in multiples of fives. Matted dial centre with chamfered, rectangular calendar aperture. The date is indicated by Arabic numerals engraved on a silvered disc carried behind the dial. The dial corners have cast brass, cherub head form spandrels. Three dial feet are attached to the front plate of the movement with pins, the other one, latched. Pierced steel hour and minute hands.

Movement:
Brass and steel weight driven two-train movement, with count wheel (or locking plate) striking on two bells, the crossed-out count wheel being mounted on the outside of the back plate. Five pillars of finned form are riveted to the back plate; the upper three are latched to the front plate, the lower pinned. Scribe lines for three of the Going train wheels are marked on the outside of the front plate. Striking pin wheel carries pins on both side of the band to operate the Roman hours; double cut out hoop wheel. Where present, wheel collets tend to be half round in profile; arbors are non-parallel in section, tending to fatten towards their centres. Anchor recoil escapement. Two plugged holes and a semi-circular cut-out are now visible on the front plate. The back cock also has a plugged hole.

Remarks:
I would refer you to the comments made by P.K.T. and J.H. in the Register description concerning the dial and movement. As they have commented, the dial indeed does not appear to be typical of Knibb's practice — for example the half-hour engraved markings might have expected to be a stylised fleur-de-lys rather than the curved arrow head design; the hour hand does seem a little over elaborate for typical Knibb. The signature in the bottom of the chapter ring was less commonly used except in a few later examples, at about the time when Joseph Knibb was moving to Hanslop, according to Lee (Ronald A. Lee, The Knibb Family Clockmakers, Manor House Press, Surrey, 1964). However, Lee implies in his description of later Knibbs that the dial is an inch or two larger than this example, so it is possible that this could be a very late London production at about the time of Joseph Knibb's retirement.

The dial indicates that the clock has so-called Roman Striking. The chapter ring has hour four engraved as “IV" instead of “IIII” and this was used by clockmakers to denote this striking arrangement. Two bells of differing tone are used. The hours one to three are struck on the lighter bell, four is struck as one light bell followed by one deep bell (IV), five is struck one deep bell, six as one deep bell followed by one light bell (VI) and so on. This method of striking tended to be found on longer duration clocks, since Roman striking required fewer blows to be struck per day than ordinary striking.

Escape wheel pinion appears large. The plugged holes around the escapement may suggest some repair/replacement. The pallet/crutch at its top has the appearance of an eighteenth century English spring clock.

The fly has a rectangular, eighteenth century appearance with the friction spring across the brass. The pinion has its cut extended either side of the main body.

LONG-CASE CLOCK
ENGLISH; about 1700
By Joseph Knibb of London. The japanned decoration on the case is not original. [pre October 2000]