If you would like a larger file, or to use the image in other ways, contact our Licensing team.
Request to view at the Prints & Drawings Study Room, level C , Case MB2E, Shelf DR59

1974 (made)
Cohen trained as a painter and represented Britain at the 1966 Venice Biennale. In 1968 he became a visiting professor at the University of California at San Diego, where he was introduced to computer programming. In 1971 Cohen took up a post as visiting scholar in the Artificial Intelligence Laboratory at Stanford University. While at the Artificial Intelligence Lab, he began developing a computer program called Aaron, in which he sought to codify the act of drawing. In its early years Aaron could only produce monochrome line drawings. This example was hand coloured by Cohen. 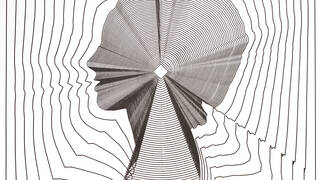