If you would like a larger file, or to use the image in other ways, contact our Licensing team.
+8
+6
images
On display at V&A South Kensington
Glass, Room 131

1725-1745 (made)
Jonathan, recorded in the Old Testament books I and II Samuel, was the eldest son of King Saul. His intrepidity and fidelity to his friend, the future King David, make him one of the most admired figures in the Bible.
The scenes show David and Jonathan sealing their friendship and love. King Saul talks of his plans to eliminate David and Jonathan speaks up for his friend to protect him. Jonathan fires arrows as a message to David, while a boy retrieves them. He warns David, who is hiding behind a rock, that he is in danger from King Saul.

1 Samuel 19:4-7 ESV
Jonathan spoke good of David unto Saul — Which he could not do without hazard to himself. Herein, therefore, he performed the duty of a true friend and of a valiant man. He put his life in his hand — Or, in the greatest hazard: And slew the Philistine — He puts him in mind of that hazardous enterprise wherein he slew Goliath; in which David did indeed hazard his life greatly, for had he missed with his sling he must certainly have been slain.

1 Samuel 20:35-42 ESV
In the morning Jonathan went out into the field to the appointment with David, and with him a little boy. And he said to his boy, “Run and find the arrows that I shoot.” As the boy ran, he shot an arrow beyond him. And when the boy came to the place of the arrow that Jonathan had shot, Jonathan called after the boy and said, “Is not the arrow beyond you?” And Jonathan called after the boy, “Hurry! Be quick! Do not stay!” So Jonathan's boy gathered up the arrows and came to his master. But the boy knew nothing. Only Jonathan and David knew the matter. ...

1 Samuel 20:41-42 ESV
And as soon as the boy had gone, David rose from beside the stone heap and fell on his face to the ground and bowed three times. And they kissed one another and wept with one another, David weeping the most. Then Jonathan said to David, “Go in peace, because we have sworn both of us in the name of the LORD, saying, ‘The LORD shall be between me and you, and between my offspring and your offspring, forever.’” And he rose and departed, and Jonathan went into the city. 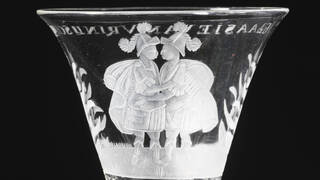