If you would like a larger file, or to use the image in other ways, contact our Licensing team.
BETA
+10
BETA
+8
images
Not currently on display at the V&A

1858 (made)
Dress fabrics embroidered with pieces of beetles' wing-cases, often cut into leaf shapes, were popular with Western women (those based in India and in Europe) from the mid-19th to early 20th century. The iridescent pieces of beetle-wing gave a lustre and sparkle to evening dresses that emulated applied gemstones. The pieces of beetle-wing were attached by piercing them with a needle and sewing them directly onto the ground fabric, in this case black net, but often fine cotton muslin. Because of their extreme fragility, they were usually used only around the edges of garments (hems, necks and sleeves) to minimise crushing. 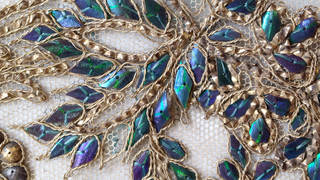 read Indian embroidery Our collection of Indian textiles ranges from rare courtly pieces to archaeological fragments, to everyday garments and fabrics, dating from the 14th century to the present day. Embroidery remains one of India's most recognisable and most prized textile traditions. Discover eight of the mo...
object details