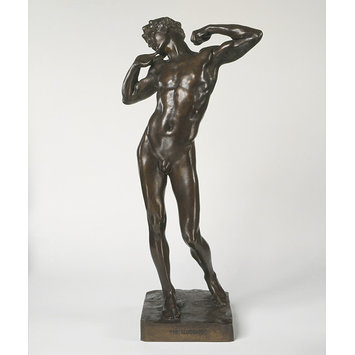 This statuette is a reduced scale copy of The Sluggard (1885, Tate), also known as Athlete Awakening from Sleeping, by Frederic Lord Leighton R.A. The edition was produced and marketed in large numbers from 1890 onwards by Arthur Leslie Collie and cast by the Singer Foundry. The statuettes became highly collectible objects for Aesthetic domestic interiors at the turn of the century.

Leighton produced The Sluggard as a pendant for his earlier Athlete Struggling with a Python (1877, Tate). The same model – the Italian Giuseppe Valona – posed for both figures. Although Leighton was mainly a painter, his Athlete Wrestling with a Python had been heralded as ushering the New Sculpture movement in Britain, by challenging frozen neoclassical conventions. The Sluggard, an idealised male nude captured in a languid, naturalist pose, also epitomises his approach. The victor garland at his feet ensures the figure is identified as an athlete, rather than a gratuitous nude. It also suggests repose after exertion in its celebration of male anatomy.

The life-size bronze was exhibited at the RA exhibition of 1886, when the art critic Edward Gosse wrote: ‘Sir Frederic Leighton, after so long a silence, came forward once more among the sculptors. His 'Sluggard' held the place of honour in the Lecture Room…In comparison with the ‘Athlete and Python,’ [‘The Sluggard’] showed very distinct progress in the sculptor’s conception of his art. The nature of that progress may be defined by saying that he had passed from hardness into suppleness and flexibility, that the forms of flesh and bone were far more under his control than they had formerly been. No one could doubt, in examining ‘The Sluggard,’ that the influence of the French has been strong on Sir Frederic Leighton, nor that he had greatly admired the ‘Teucer’ of his own youthful colleague, Mr. Thornycroft. If it be not too technical to say so, one felt the thumb-touch in this splendid study of a powerful lad yawning and stretching; nothing could be modelled more closely in accordance with the principles of the new school.’

Frederic Leighton (1830-96) was born in Scarborough in 1830, the son of a physician. After receiving an all round education, he studied art at Frankfurt under Steinle, and in Brussels, Paris and Rome. In 1852 he began to work independently and spent the next three years in Rome. Leighton's painting Cimabue's Madonna carried through Florence (1853-55) was his first major work, and an immediate success. When it was shown at the Royal Academy in 1855, it was bought by Queen Victoria.

Leighton settled in London in 1859, though he frequently travelled abroad; he was elected ARA in 1864 and RA in 1868, and attained the Presidency of the Royal Academy in 1878. He was the most influential of the Victorian Classical painters, and an important exponent of the 'subjectless' painting associated with the Aesthetic Movement, in which pictorial narrative is suppressed in favour of beauty and atmosphere. Leighton died on 25 January 1896 and is buried in St. Paul's Cathedral. His tomb, designed by Thomas Brock in 1902, features his effigy flanked by allegories of Painting and Sculpture, the latter holding a statuette of The Sluggard.

Bronze statuette, one of an apparently unlimited edition cast from the original plaster sketch-model for Leighton's life-sized bronze statue of 'The Sluggard' now at Leighton House. Inscribed.

'FRED LEIGHTON'
front of base

'THE SLUGGARD'
front of base

'J.W.SINGER AND SONS, FROME, SOMERSET / PUBLISHED BY ARTHUR LESLIE COLLIE / 39b OLD BOND STREET LONDON / MAY 1st 1890'
back of base

Original acquisition information records that this bronze was cast from the clay sketch-model for the bronze statue exhibited at the Royal Academy in 1886. Editions of The Sluggard, also sometimes known as Athlete Awakening from Sleeping, were produced in large numbers, originally published by Arthur L. Collie in 1890, cast in the Singer Foundry in Frome, Somerset. The copyright passed from Collie to J.W. Singer & Sons Ltd some time in the early decades of the 20th century; it appears in the Singer trade literature around 1914. The Royal Academy has a bronze statuette cast from a plaster version given to the Royal Academy by the sculptor's sisters Mrs Orr and Mrs Matthews in 1896. The original model for the life-size bronze statue of 1885 was presented to the Tate Gallery, and is now on loan to Leighton House, London. Published versions held in museum collections include those in the Leeds City Art Gallery and in the Ashmolean Museum, Oxford. A version dated 1885 is in the Tate Gallery.

This work is almost contemporary to Rodin's Age of Bronze, displayed nearby. Although Leighton was mainly a painter, he shared Rodin's interest in the naturalistic depiction of human form. The figure was cast from a clay model that he had made in 1882 for a life-size bronze figure, a pair to the Athlete Struggling with a Python, also nearby. [March 2007] 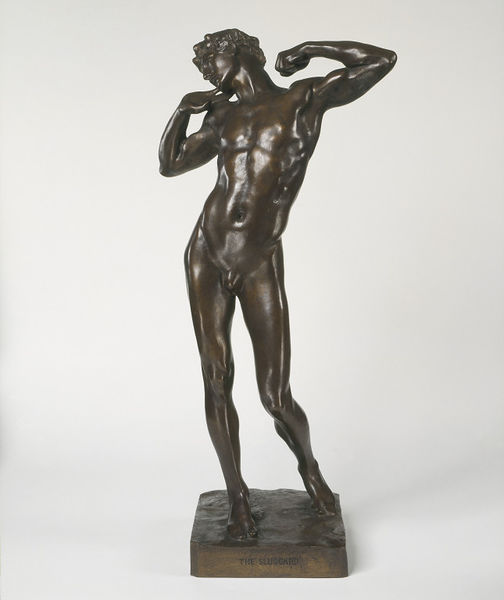