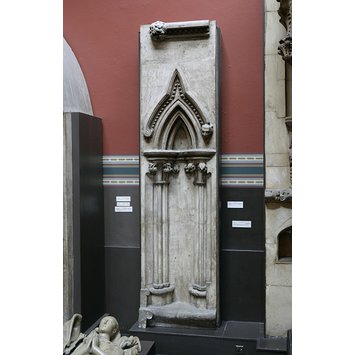 Copy of an Arch and Mouldings

The simple Gothic forms of 13th-century English architecture were especially admired by architects and antiquarians in the 1850s. To provide examples of the style, this Museum acquired casts of elements of architecture and sculpture from York Minster. The cast reproduces arrows on the surface of the original. Medieval masons made these marks to identify their work and to help them assemble the stones.

Plaster cast of an arch and mouldings depicting an arch from the York Minster and reproducing arrows from the surface of the original which medieval masons made to identify thier work.

England (Copy, made)
York (Original, made)

Cast of an arch and mouldings created in plaster in England about 1858 and acquired by the museum in 1858. The aquisition of casts from York Minster were collected by the museum in order to provide examples of the much admired simple Gothic forms of 13th century England. The cast is of the arch from York Minster which was sculpted by an unknown artist in York about 1250.

Plaster cast of an arch and mouldings from York Minster by an unknown caster in England about 1858. The original is by an unknown artist about 1250.

Cast of
Unknown artist
Arch and Mouldings
About 1250

The simple Gothic forms of 13th-century English architecture were especially admired by architects and antiquarians in the 1850s. To provide examples of the style, this Museum acquired casts of elements of architecture and sculpture from York Minster. The cast reproduces arrows on the surface of the original. Medieval masons made these marks to identify their work and to help them assemble the stones. 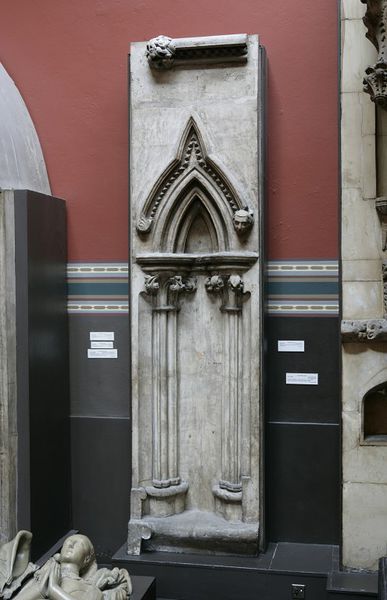