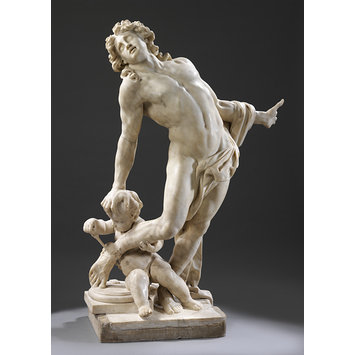 Achilles, the Greek hero of the Trojan war, is shown here with his body arched back dramatically, dying from an arrow wound in his heel. A putto at his feet is trying to remove the arrow. According to legend, his heel was the only part of Achilles' body which was vulnerable to injury because it had been held (and therefore covered) by his mother Thetis when he was an infant and she had dipped him into the waters of the River Styx which were meant to give him protection. The V&A has a sculpture by Thomas Banks of 1789 depicting this event.

The Dying Achilles is a work by the French Baroque sculptor Christophe Veyrier (1637-89), who was born in Trets, in Southern France, one of four brothers who were all involved in artistic professions. Christophe was a pupil of the sculptor Pierre Puget - who was born and died in Marseille nearby - and became his assistant. It shows the clear influence of Puget's work and in particular the latter's St. Sebastian in S.Maria del Carignano, Genoa. Veyrier worked as Puget's assistant in Genoa between 1661 and 1667 so would certainly have known this work. Veyrier travelled to Rome in the late 1660s and in its pose, the figure of Achilles also has echoes of the work of Bernini which he would have encountered there. Veyrier returned to France in 1670, working in Aix en Provence and, subsequently, Toulon where he died.

Not many documented independent works by him exist but they include portrait busts in marble and terracotta, including one of Puget. The Louvre Museum has a magnificent and imposing (over 3m high) marble statue of Perseus and Andromeda by Puget, made for Louis XIV 1678-84 and installed in the gardens of Versailles in 1685, on which Veyrier is thought to have collaborated.

This statue, signed and dated 1683, was produced at the same time as Veyrier was working on his most important work, in marble and stucco; the decoration of the chapel of Corpus Domini in Toulon, which was commissioned in 1682 and completed by 26th May 1686. This was to replace an earlier work in wood by Puget which had been destroyed by fire.

Standing male figure, marble, naked save for a cloak falling over the left arm and thigh. Stands with left arm outstretched (index finger of left hand broken) and body bent back. Behind the figure, to the viewer's left, a putto seated on the base of a column attenpts to extract an arrow (the shaft and tip of which have been broken off), from the right heel.

Purchased from Mr H.M Calmann for £150 with funds from the John Webb Trust.

Statue, the dying Achilles (with putto extracting an arrow)

The Greek hero Achilles is shown dying from an arrow wound in his heel, the only part of his body which was vulnerable to injury; the putto at his feet is trying to remove the arrow. Veyrier worked in France and Italy, and was a pupil of Pierre Puget. He sculpted this figure at the same time as he was commencing work on one of his most important commissions, the decoration of the chapel of Corpus Dominic in the Cathedral of Toulon. 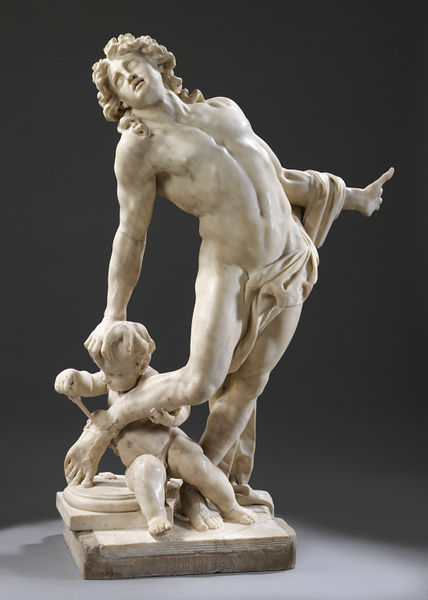