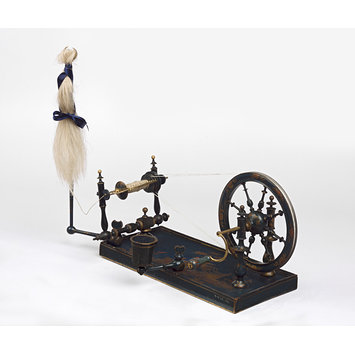 Small 'boudoir' spinning wheels for use on a table or the lap were used in drawing rooms of the wealthier classes in the18th century. Needlework was an important element in the education of young ladies and such equipment allowed them to show off their elegant hands as they practised their skill. This spinning wheel is particularly finely finished with gold Chinoiserie and floral designs on a blue background, in imitation of Asian lacquer.

The spinning wheel is decorated in imitation of Asian lacquer, with Chinese designs in gold on a blue background. The rectangular table, edged with raised and partly gilded beading, has a finely executed scene with a cockerel perched on a tree and a hen in a landscape of flowering shrubs, water and flying insects. The main elements of the scene are in low relief. Details are added over the gilding in black. Some areas such as the cockerel's comb, were coloured red, now much rubbed. The wheel and its supports are japanned blue with painted red and gold flowers. The blue japanned base of the spinning wheel is in good original condition without retouching.

The metal-edged wheel has eight finely turned spokes (all of which appear to be later replacements) and a decorated rim, supported on two posts turned in a baluster shape. It has a gilded iron handle with a painted wooden knob. A vertical spindle distaff is fixed to the front of the base with a turn screw and has a replacement brass crescent to hold the flax at the top (remade by Museum technicians 2014 from a 19th century Museum photograph. The original crescent would have been gilded brass). The maidens, (upright turned posts supporting the flyer), were both missing by 2013 and were remade in 2014. They were painted and the turned parts given highlights in bronze paint. New leather bearings were pegged on, with small pieces of silicone line the holes in the leather to protect the metal. The flyer is adjusted with a turn screw in the end of the base. The flyer is gilded brass, with hooks along the edges to guide the spun thread onto the bobbin, on a gilded iron spindle. A water pot (the lining missing) is attached to a turned arm behind the flyer. A replacement post was attached to the underside of the waterpot in 2014. The arm supporting the distaff has a repaired break.

The mother-of-all, ie. the horizontal turned part which supports the maidens, is painted black and gold and is evidently a later replacement. One of the turned supports for the wheel, on the side opposite the handle, has a greenish hue and has slightly different turning from the other support, so must also be a replacement. The greenish hue of this replacement support suggests that the lacquer appeared greener at the time it was made, some time before 1858, when the spinning wheel entered the Museum collection.

In 2014 the wheel was fitted with two flax drive bands and with unspun flax on the distaff, to show it in the Europe Gallery (opened 2015) in going condition. The unspun flax is held in place with a modern ribbon for the 2015 display. Tradition has it that pink ribbon was used by unmarried and blue by married women. The bobbin has some original spun flax on it, but this is very fragile and new flax has been wrapped clockwise around it.

Wood, japanned blue with gilding and red and gold paint.

This spinning wheel was bought for £5.00 by the Museum in 1858 and its earlier provenance of is not known. It is decorated with French varnishing imitating Asian lacquer, a technique known in Britain as japanning. In France, 'Vernis Martin' is used as a generic term for high quality French Rococo varnish decoration. Two generations of the Martin family worked in Paris, the eldest being the first French varnisher to receive the title 'vernisseur du Roy' (varnisher to the King) in 1725. However most French varnishers remain anonymous since they did not sign or mark their work, and it is not known who decorated this spinning wheel. Vernis Martin used a clear, durable varnish derived from copal, a tree resin grown in tropical countries.

This spinning wheel was designed for spinning fine fibres, probably silk, or possibly flax, into thread. The tiny hooks on the flyer, very close together, could only be used for flax or silk. The fibres were attached to the tall distaff and fed by hand into the flyer. The small water pot was used to dip the fingers into, in order to dampen and smooth the fibres as they were spun. Water pots were not used for wool spinning. The rotation of the flyer twisted the fibres into thread, which then wound onto the bobbin. A cord around the flyer whorl connected it to the wheel, which was was operated by turning a handle. Small spinning wheels such as this one were used on the lap. The user would feed the fibres into the flyer with her left hand while turning the wheel with her right.

Spinning flax on larger, wooden spinning wheels, for weaving into linen, was an essential rural craft. It was traditionally carried out by women, hence the adjective 'distaff' to refer to the female side of a family. For wealthy women, however, spinning on miniature, beautifully made spinning wheels became a popular pastime. In 1770 the Duchess of Northumberland, when staying in Paris, recorded in her diary that she had accompanied Lady Berkeley to the Boulevards, 'where I believe she had 100 Spinning Wheels brought into the Coach to chuse of.' (Syvia Groves, 'The History of Needlework Tools', London, Country Life 1966)).

Needlework and other textile arts were important elements in the education of well-to-do young women. While they practised their skill and demonstrated their industriousness, women could also show off the elegance of their hands. This small luxury spinning wheel would have been placed on a table or on the lap. It is finely decorated in imitation of Asian lacquer. 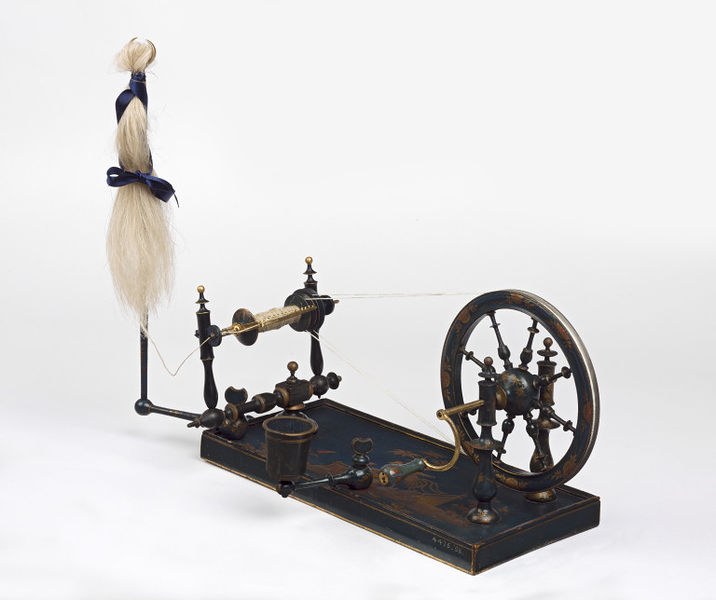