If you would like a larger file, or to use the image in other ways, contact our Licensing team.
BETA
+40
BETA
+38
images
Not currently on display at the V&A
Textile
1960-1964 (made), 1960-1964 (made)
Àdìrẹ is an indigo-dyed cloth traditionally produced by Yoruba women in south-western Nigeria. A range of resist-dye techniques are used to create àdìrẹ patterns, sometimes incorporating more than one technique in a single cloth. The ground-cloth of cotton is folded, stitched, tied or otherwise worked-upon in preparation for dyeing; these areas resist the dye, creating the cloth’s distinctive blue and white patterns. The precise origins of àdìrẹ are unknown, though indigo-dyeing has been in evidence across West Africa for centuries. Àdìrẹ has an enduring presence in the region, becoming a popular, everyday cloth, with many women dyeing àdìrẹ of their own design within the home. Once dyed, àdìrẹ cloth can be wrapped or stitched to create garments, such as a woman’s ìró (wrapped skirt). From the 20th century onwards, factory-woven cloth began to be used; this cloth accepted the dye more easily, creating a finer clarity of design. Whist factories are now able to mass-produce imitation àdìrẹ, the popularity of the traditional hand-worked cloth remains, made by local artisans in historic dyeing centres such as Ibadan.

Àdìrẹ is subcategorised according to the method of resist-dyeing used. This cloth is an example of àdìrẹ eleko, which uses a cassava starch paste as the resist. This can be applied to the cloth either using a stencil, or freehand painted using brushes or natural tools such as chicken feathers, the mid rib of a palm leaf, or a matchstick to produce different thicknesses of line. The cotton cloth of this àdìrẹ was factory-woven, before being freehand painted and hand dyed. Two panels of 4x7 squares have been stitched together along the long edges creating one whole piece. This would be worn by women wrapped around the waist with the seam running horizontally, forming an ìró (wrapped skirt).

The pattern depicted is known as Ibadan dun which loosely translates to ‘Ibadan is good’ or 'Ibadan is sweet' in Yoruba. The cloth was made in the town of Ibadan in south-western Nigeria which specialises in producing hand painted adire cloths. The pattern is made up of squares which contain a variety of designs, many of which relate to specific proverbs and events. In one square (repeated four times), five pillars can be seen alternating with spoons; the pillars are a reference to Mapo Hall, the town hall of Ibadan and it is from this design the cloth takes its name. The quality of the cloth can be informally determined by the number of spoons depicted; three spoons indicating a lower quality, four for an average quality, and five indicating premium quality. This cloth is unusal in it's depiction of six spoons.

The underside of this cloth has been signed with a scorpion or snail symbol, but it has not yet been possible to trace the name of the maker to whom this belongs. Signatures such as this had a practical use, allowing the maker to be reunited with their cloth after it emerged from the dye pot. This symbol can also be seen in the main body of the cloth, incorporated into several of the decoartive squares, pointing towards a well-known maker whose work was highly-desired and worth flaunting. There is a second cloth in the collection painted by the same woman (CIRC.587-1965). 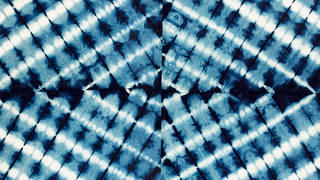 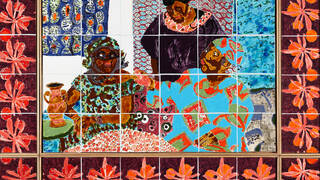 make Design and make a talking textile Explore fabrics from across Africa that tell stories about the histories and cultures of the people who made them. Have a go at designing and making a fabric pattern that tells a story about you. Designed for ages seven and up.
object details