If you would like a larger file, or to use the image in other ways, contact our Licensing team.
+1
On display at V&A South Kensington
Africa Fashion, Temporary Exhibition Gallery 40

Textile
1900-1949 (made), 1900-1949 (made)
Formed by stitching together narrow strips of handwoven cloth, Kente often features colourful woven patterns. The term is particularly used to refer to the silk cloth of West Africa, where it has been traditionally crafted and worn by Asante and Ewe populations since at least the 17th century, chiefly in the region of modern-day Ghana. Stripweave is an ancient textile type, created by stitching together individual, narrow strips of handwoven fabric to form a whole finished cloth. Asante and Ewe men traditionally took on the role of weaving, using a small double-heddle handloom to make the cloth strips, typically warp-striped and often enhanced with weft-float patterns. These strips are arranged in an off-set manner of alternating patterns – the resulting effect is that of an elaborate design that if it were one continuous length would require a much larger and more complex loom. Historically the reserve of royalty and the elite, this highly prized textile is still today worn by many, often for important occasions and celebrations.

Different kente weaves, patterns and colours often hold special symbolic meaning. Many are given a particular name, usually assigned by the weaver, based on proverbs, current events, or everyday objects. It is possible to distinguish between Asante and Ewe kente through the types of pattern and fibres used – whilst Asante favour geometric patterns in silk, Ewe are known to include figurative motifs such as animals, people and letters in their weft-float designs, utilising a blend of cotton and silk. Whilst the names of individual weavers often go unrecorded, lost to history, this kente bears a tantalising signature – possibly that of the weaver, or the cloth's commissioner. 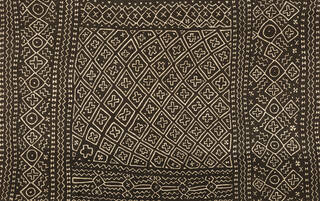 read Cloth of a continent: Africa Fashion Africa is home to an abundance of cloth types, encompassing a breadth of materials and techniques as diverse as the continent itself. Revered for their distinctive weaving, dyeing, and decorative processes, as well as the raw materials used, these cloths are the tactile result of centuries...
Object details