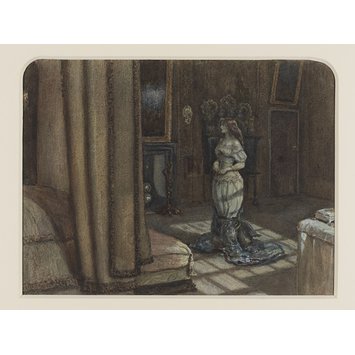 The Eve of St. Agnes

According to folklore, the Eve of St Agnes (21 January) was the night when a woman would see her future husband in her dreams if she followed certain rituals. In this watercolour Millais depicts this subject as it was described in a poem by John Keats (1819). Millais shows the heroine in the act of undressing for bed, suddenly transfixed by a sense of awe at the significance of the occasion. The model for the girl was Millais' wife Effie. The watercolour is a version of the larger oil painting of the same subject that he exhibited at the Royal Academy in 1863. He set up the scene with great care, taking Effie to Knole Park, a vast Jacobean house in Sevenoaks, Kent. He posed her in a freezing room, standing before the bed in which James I (ruled 1603-25) was said to have slept.

A woman stands in her bodice and petticoats, with her dress around her knees, at the foot of a four-poster bed in a dark room. She is lit by a lattice-effect moonlight pattern, from the right.

Millais is always remembered for his precocious talent for painting and technical ability. He exhibited a mammoth history painting at the Royal Academy at the age of 17 which paved the way for a successful career. The desire for success was the motivating force behind much of Millais' work, especially from the 1870s onwards when his style developed apace with sentimental but popular Victorian taste. However, the 1860s was a time of transition for Millais. In the 'Eve of St Agnes' he harks back to earlier Pre-Raphaelite works, both in the choice and treatment of the subject matter.

Millais has depicted a scene from a poem by Keats in which the heroine perfoms an elaborate ritual in order to dream of her future husband. Millais has caught her at the moment when she is undressing, transfixed by the awe of this special night, the Eve of St Agnes. This watercolour is a version of the larger oil painting of the same subject exhibited at the Royal Academy in 1863, and now in the collection of the Queen Mother. Millais followed an exacting formula during the painting of St Agnes, in keeping with the Pre-Raphaelite method of obtaining complete verisimilitude, as when he placed Lizzie Siddal in a bath of water to pose for his famous 'Ophelia' in 1852. Millais journeyed to Knole Park and there in a freezing room, with the bed on which James I was said to have slept, he painted the oil version. For three nights Lady Millais posed in her bodice as Madelaine, the heroine of the poem, while moonbeams fell across her body at the required angle to produce the lattice shadow effect.

Millais was primarily a painter in oils, but his technical versatility enabled him to translate the ghostly mood of mystery of the St. Agnes legend into the medium of water-colour. The study, probably painted later in the same year, shows an overall grey-green effect rendering the 'wintry moon' and atmosphere of Keats' poem. Even the blue of her dress enhances the coldness and trance-like quality expressed by Keats. Millais admirably captures the stillness and tension of the moment when the girl, transfixed, dares not look round for fear of breaking the spell. 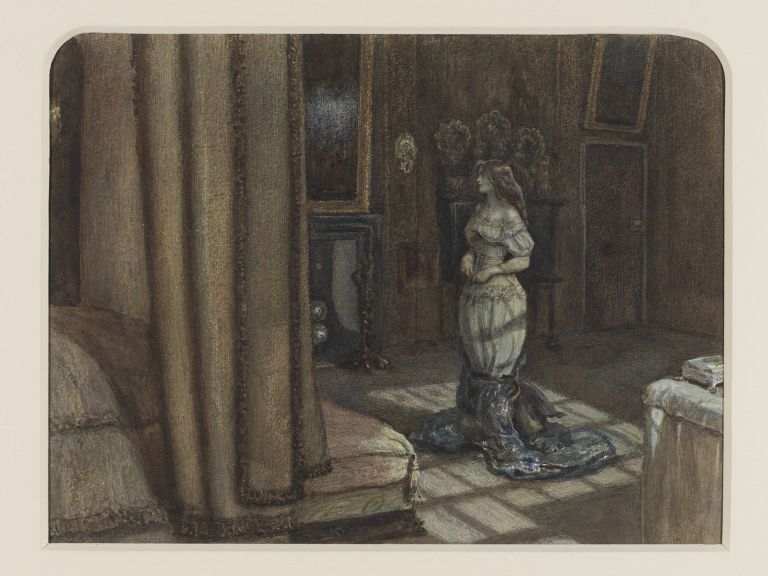