If you would like a larger file, or to use the image in other ways, contact our Licensing team.
BETA
+2
BETA
Not currently on display at the V&A
On short term loan out for exhibition

02/06/1953 (photographed)
Colour photograph depicting Queen Elizabeth II on her Coronation Day, 2nd June 1953. Seated upon a throne, the new Queen is crowned and holds the orb and sceptre. She is dressed in an elaborately embroidered gown and wears a long dark cloak. The cloak, like the gown, is embroidered with golden threads. It is trimmed with a thick white and black fur and fastened with broad, golden braids and knots. Her jewels, crown and clothing glisten. The scene is framed by a heavy draped curtain, which is tied back to reveal a painted backdrop depicting the grand latticed naves of Westminster Abbey (where the Coronation ceremony had taken place shortly before this sitting). 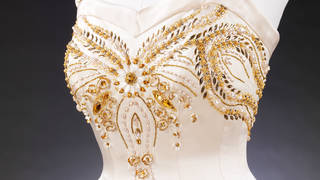 read 'Silver and Gold' by Norman Hartnell Sir Norman Hartnell (1901 – 79) was the star of London couture during the interwar years, gaining international fame as dressmaker to the British royal family. This abridged extract from his autobiography describes the most momentous commission of his career: the Coronation dress of Her Ma...
object details