If you would like a larger file, or to use the image in other ways, contact our Licensing team.
BETA
+1
BETA
On display at V&A South Kensington
Request to view at the Prints & Drawings Study Room, level C , Case BLCG, Shelf B

Assembling a Former for a Stator

Photograph
mid 20th century (taken), 2007 (taken)
Maurice Broomfield (1916-2010) worked to photograph the changing face of British manufacturing industries during the 1950s and 1960s. His photographs are recognized for their uniquely modern design elements, humanist strain, and their contribution to the documentation of the rebirth of British industry in the post war era.

Broomfield was often commissioned by manufacturers to produce photographs of a company's product, facilities and workers. One approach that lent a special force to his photographs of industry was his attitude towards workers; instead of emphasizing the mechanical or repetitive qualities of modern work, he chose to illuminate the strength and sensitivity of individuals. In his images, monumental machines and bizarre equipment are examined or operated by crisply attired men and women.

Heavily influenced by the New Objectivity aesthetic that emerged in Germany in the 1920s, Broomfield employed the use of dramatic lighting and unconventional camera angles, but brought the aesthetic to new levels in his use of colour film. He worked closely with Imperial Chemical Industries (ICI) and llford, the manufacturer of photographic paper, to test new colour processes. His, and the industry's shift, from black and white to colour, is represented in these 12 photographs. 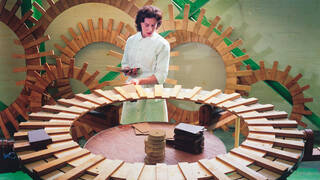 read Maurice Broomfield – an introduction Maurice Broomfield (1916 – 2010) made some of the most spectacular photographs of industry in the 20th century. His work spans the rise of post-war industrial Britain in the 1950s to its slow decline into the early 1980s. From shipyards to papermills, and textiles production to car manufac...
object details