If you would like a larger file, or to use the image in other ways, contact our Licensing team.
BETA
+1
BETA
On display at V&A South Kensington
Request to view at the Prints & Drawings Study Room, level F , Case EDUC, Shelf 12.2

Benjamin Brecknell Turner (1815-1894) was one of the first, and remains one of the greatest, British photographers. He began practising photography in 1849 according to the ‘calotype’ technique patented in 1841 by the British inventor of photography W. H. Fox Talbot (1800-1877), taking out a license directly from him. Turner exhibited at the world’s first public photographic exhibition, held at London’s Society of Arts in 1852, where he was singled out by a reviewer from the Times as one of the best contributors. In 1855 he won a medal at the Paris Exhibition Universelle and continued exhibiting his photographs in photographic society exhibitions across Britain until the 1880s.

Turner is best known for his bold and large-scale (30 x 40 cm) albumen prints from calotype negatives showing rural English scenes in the picturesque tradition: ruined abbeys, castles, farmhouses and the rural landscape. However, he also made accomplished portraits of family, friends, and fellow photographers, and for these he often used the newer wet collodion on glass process.

Turner earned his living from running a successful tallow chandler’s business in the Haymarket, London, making candles and saddle soap. Rather than the professional photographers, it was the Gentleman-amateurs like Turner who contributed the most significantly to the rapid technical and aesthetic development of the medium that occurred in the 1850s. They furthered discussion through meetings and journals, exchanged experimental and technical findings and photographic prints and exhibited in a network of clubs and societies devoted to the art of the photograph. Turner played an active role in such bodies in his role as a founder member, and later vice-president of the Photographic Society of London.

This selection of photographs encompasses Turner’s earliest experiments in photography, made barely ten years after the announcement of the invention of the medium. 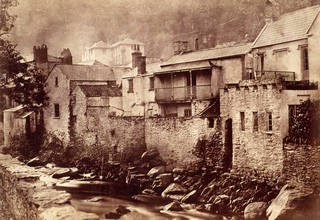