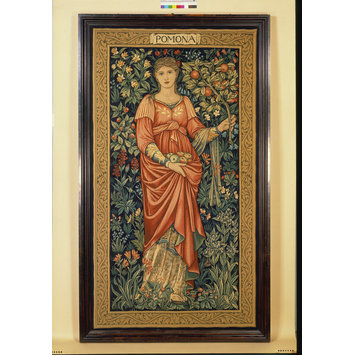 In Roman mythology, Pomona was the goddess of fruit trees and orchards. Her name comes from the Latin word pomum, meaning fruit. Her story was told by the Latin poet Ovid in the Metamorphoses, in which she was pursued by the god Vertumnus, and the two lovers were popular subjects in painting and the decorative arts, including tapestry, in the 16th century and later.

William Morris considered tapestry “the noblest of the weaving arts”, and his firm of Morris & Co produced exceptional examples, with scenes of Arthurian legend, medieval romance, and mythology, like this piece. The account book of the artist Edward Burne-Jones shows that he was paid £25 by Morris & Co in 1882 for the figure of Pomona, his first design specifically for tapestry. The design was woven in several versions, with alternative backgrounds to the figure, and to different scales. In this version the flowers and fruit, including the branch of apples Pomona is holding, were designed by John Henry Dearle.

Tapestry panel of hand-woven wool and silk on a cotton warp. Pomona is shown in layers of costume with various leaf motifs cradling several apples in her gathered skirt. Detailed plants fill the background.

Pitch 14 warp threads to the inch. Pomona, Roman goddess of fruit and trees shown as a Maiden standing amongst various flowers and fruits holding an orange branch in her left hand and cradling eight apples in her skirt with the other. She is dressed in three layered robes and the skirt of the overdress is hitched up to show the two lower layers. The under-robe is depicted with a representation of gold and white patterned damask, the middlerobe of blue with a decoration of gold leaves and an overdress of pink gathered by a high sash and showing a decoration of laurel leaves at the neckline. She has a transparent scarf over her left arm. The background foliage is in the 'millefleur' tradition with strawberries, carnations, dog violets, harebells and narcissi amongst the plants illustrated in numerous shades of blue, yellow, red and green with white details. The border, which measures 3.75 inches at the side, 4 inches at the top and bottom, is composed of a stylised twisted acanthus motif in beige on brown imitating a gilded wooden picture frame.

Tapestry woven in wool and silk on a cotton warp

One of a pair of designs drawn for tapestry by Burne-Jones. It is one of six versions from the original design. 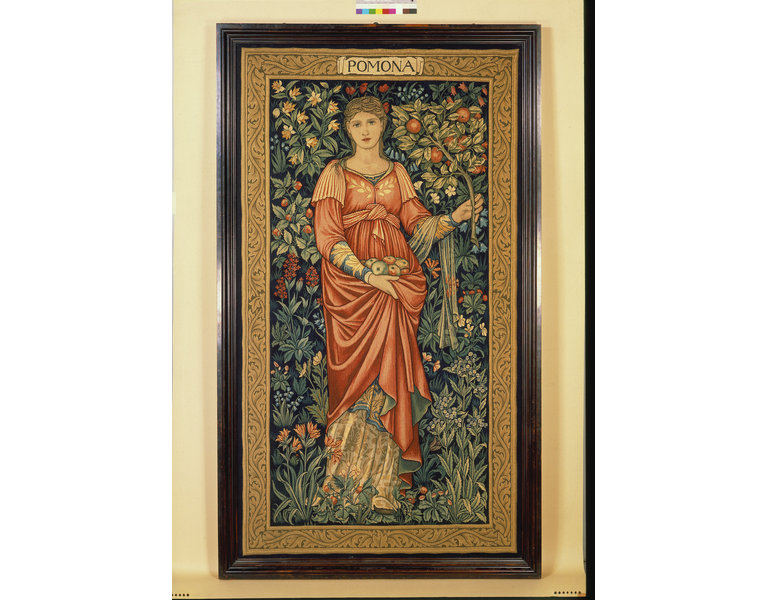