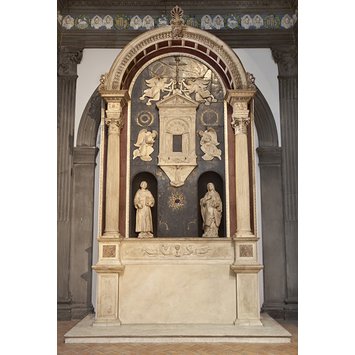 This is the only Italian Renaissance chapel that can be seen outside of Italy. It comes from a Franciscan convent dedicated to St Clare and once contained the high altar. The form and style is typical of Giuliano da Sangallo, who was influenced by Brunelleschi, the leading Florentine architect of the 1430s and 1440s. During Mass, the public sat in the nave while the nuns observed from the choir loft above the entrance door. The chapel belonged to an order of nuns known as the Poor Clares. The founders of the order were St Francis and St Clare, shown here in the niches of the altarpiece. The rectangular tabernacle in the centre is placed unusually high so it could be seen by the nuns sitting in the elevated choir loft at the opposite end of the church. The tabernacle would have contained the consecrated bread (the host), but it is unclear how the priest would have reached it in this position.

Chancel chapel (Cappella Maggiore) including frieze and tabernacle from Church of Santa Chiara.

Jacopo Bongianni commissioned the high altar of the church of Santa Chiara as part of a building campaign begun in the 1490s. It is still unclear who the architect was, though his work clearly shows the influence of Filippo Brunelleschi. It is reminiscent of Giuliano da Sangallo, and has been attributed to him or his school, though this must remain conjectural. (Pope-Hennessy, p. 178 and Marchini, pp.34-38).
Bongianni left money to the convent in three successive wills, dated 1492, 1497 and 1507, and an act of donation from 1494. The money was intended to pay for the rebuilding of the church, the high altar, his tomb to be placed in front of it, two side altars and paintings by Lorenzo di Credi and Perugino, that were placed on the side altars and surmounted by lunettes from the della Robbia workshop. The paintings and lunettes are currently in the Uffizi, Pitti and Accademia galleries in Florence, since they were removed from the church in the 1808 Napoleonic suppressions. In the late 1840s and early 1850s, Pio Fedi, a sculptor, used the church as a studio. He remodeled the façade and portal, but left the high altar and chapel in situ. In 1860, J. C. Robinson bought the chapel on behalf of the V&A, and it was dismantled and shipped to London, whereupon it was reassembled in the North Court of the Museum. This must have happened after 1862, as Robinson stated in his catalogue of Italian sculpture at the V&A that the chapel was not yet reconstructed.
In 1908 the chapel was moved from the North Court to the eastern apsidal end of the Aston Webb wing of the museum, parallel to Cromwell Road, where it remains today.

Historical significance: The chapel of Santa Chiara is the only example of its kind outside of Italy. As a complete decorative and devotional structure from Renaissance Florence, its location in the V&A has allowed for close study of it as a whole. The terracotta reliefs that form the frieze, though initially attributed to the della Robbia family, have been convincingly ascribed to Benedetto Buglioni by Giancarlo Gentilini. (Gentilini, p. ) The sculptures of St Clare and St Francis, attributed to Leonardo del Tasso by Vasari, have been shown by Doris Carl to have been originally commissioned to Benedetto da Maiano. (Carl, p. ) Her examination of an inventory of the goods left in his shop after his death in May 1497 suggests that the St Francis and St Clare, already begun by the master, as well as the rest of the high altar, were completed by his assistant Leonardo del Tasso between 1497-99. The tabernacle, situated high in the middle of the altarpiece, was most likely executed by Antonio Rossellino and his workshop in the 1460s. (Pope-Hennessy, p. 129) It is unclear why it was inserted into the new sculptural programme, but one hypothesis is that it was the site of Eucharistic miracles and therefore retained as a focal point of the high altar. The height at which it is located suggests that it was not functional, as it would have been very difficult to access the tabernacle notwithstanding the space that existed behind the high altar and the back wall of the chapel. However, it can not be seen as purely decorative either, as the tabernacle was a locus of Eucharistic devotion for the nuns and those attending the Mass. The reason for its height might be explained by the nuns’ seating locations in the elevated choir at the far end of the church. From such a height, they would have had an unimpeded view of the tabernacle, and the Mass being conducted below it, and therefore been able to have a more focused devotional experience.

The convent of Santa Chiara was founded on the site of a hospital, in the Oltrarno in Florence. Maria degli Albizzi, a member of one of Florence’s leading families, took over the site in 1452 and dedicated the convent for the use of her fellow Clarissan nuns. Jacopo Bongianni’s sisters were nuns at the convent, and this is probably why he donated money for the rebuilding campaign. Bongianni’s own piety was an important factor; as his letters demonstrate him to have been an intensely religious man who followed the teachings of the Dominican preacher Girolamo Savonarola.
The plan of the church seems to have been quite simple, encompassing a single aisled nave with a raised choir. The raised choir was necessary in order to keep the nuns separate from the lay people who would have attended Mass in the church. Comparison with other female convents in the same neighbourhood, as well as the location of supporting columns in the nave (still accessible today), suggest strongly that the choir was above the entrance door.
The appearance of Santa Chiara would have been much like other neighbourhood churches, such as Santa Felicita and San Felice in Piazza. Both of these churches were female convents, and also had raised choirs, though it would appear that San Felice’s choir was added later. The high altar of San Felice in Piazza is very similar to that of Santa Chiara, with pietra serena columns and whitewashed walls. However, the sculptural programme of the high altar sets Santa Chiara apart, both in medium – most high altars in Florence at this time were adorned with paintings, not sculpture, and message, as it serves as a very early example of Eucharistic devotion due to the concentration on the elevated tabernacle. 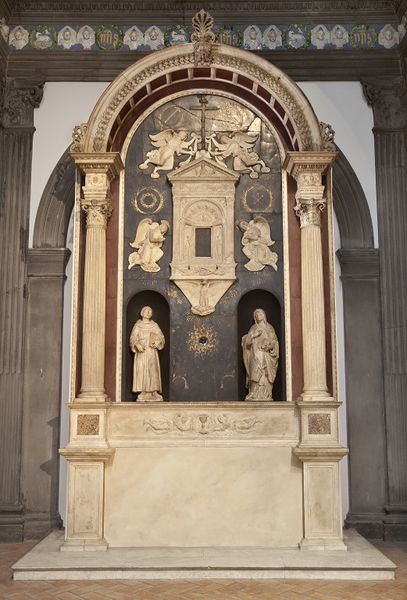