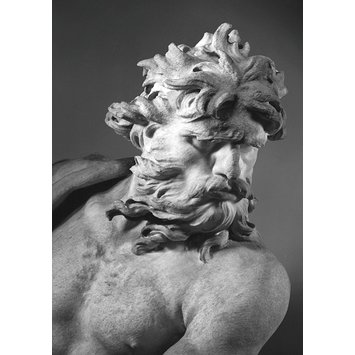 The group was commissioned from the leading Italian Baroque sculptor, Gianlorenzo Bernini, by Alessandro Peretti, Cardinal Montalto, for the garden of the Villa Montalto in Rome, and carved within a year in 1622-23. In the seventeenth and eighteenth centuries the group was one of the most celebrated sights in Rome, and a number of engravings show it in its original position, standing at the upper end of the large fish-pond, known as the Peschiera or Peschierone, in the Montalto garden. This impressive group originally formed the centrepiece of a complex system of fountains and cascades. It projected a single jet of water through the conch-shell held by Triton, who was misidentified as 'Glaucus' (the fisherman who, according to mythology, turned into a merman - half man, half fish) in some engravings and references.

In classical mythology Neptune ruled over the seas and its inhabitants. His son Triton was a merman. Neptune and Triton are portrayed with great vitality as they command the seas, which we are to be imagined around the base of the group. The composition may be based on Ovid's account of the Flood (Metamorphoses, Book 1, 330-42), in which Triton is ordered by Neptune to blow his conch-shell to summon the waters to retreat. However, it is also often associated with the Quos Ego ('Whom I'), Neptune's unfinished threat to the winds to cease stirring the seas, from Virgil's Aeneid (Book 1, 135).

Neptune stands on a shell in the act of thrusting downwards a trident (replacement in wood) held to his right. The figure is nude save for a cloak. His weight is thrown forward on to the right leg, and the left foot rests on the further edge of the shell. Triton is below, between the legs of Neptune, blowing on a conch-shell.

The group was commissioned in 1620-22 from the great Italian sculptor Gianlorenzo Bernini by Alessandro Peretti, Cardinal Montalto, for the garden of the Villa Montalto in Rome. The work received widespread critical acclaim and was one of the most celebrated sights in the Eternal City during the seventeenth and eighteenth centuries. It remained in the Montalto garden until 1786, when it was sold to the British art dealer, Thomas Jenkins. It was later purchased by the painter, Sir Joshua Reynolds, in whose possession it remained during his lifetime. Later it was sold to Charles Pelham, first Lord Yarborough, and initially placed in the garden of Walpole House, in Chelsea. It was later at Lord Yarborough’s country estate, Brocklesby Park, in Lincolnshire, before arriving in the Museum in 1950.

Neptune is accompanied by Triton blowing a conch-shell, through which a single jet of water projected. He was misidentified by the seventeenth-century biographer Filippo Baldinucci as Glaucus, a fisherman who, according to Greek mythology, changed into a merman by chewing magic blades of grass.The group is therefore often referred to in engravings and literature as 'Neptune and Glaucus'. It may represent a scene from Ovid's Metamorphoses, (Book 1, 330-42), in which Triton is ordered by Neptune to blow his conch-shell to summon the waters to retreat. However, it is also often associated with the Quos Ego ('Whom I'), referring to Neptune's unfinished threat as he raises his Trident to the Winds, so as to calm the storm, from Virgil's Aeneid (Book 1, 135).

The group was carved in just under a year, between March 1622 and February 1623, when the artist was about twenty-five years old (see Avery 2010, p.223). It falls between the equally extraordinary groups of Pluto and Proserpine and Apollo and Daphne, both housed in the Villa Borghese in Rome. Bernini produced other sculptures for the cardinal, whose early death in June 1623 cut short that relationship, but led to Cardinal Scipione Borghese taking over the commission for Montalto's David (also in the Villa Borghese).

Purchased in England with the Assistance of the National Art-Collections Fund (Earl of Yarborough, £15.000). 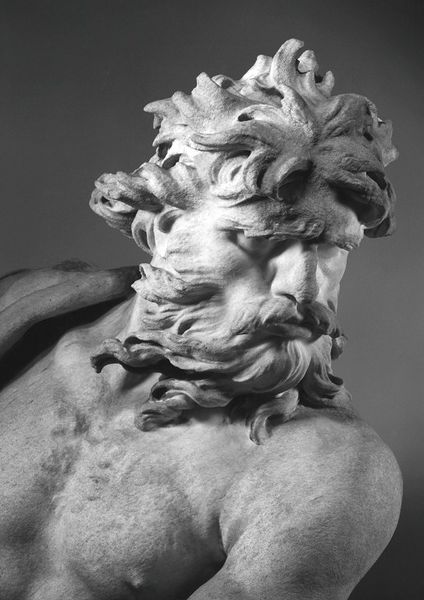