If you would like a larger file, or to use the image in other ways, contact our Licensing team.
BETA
+3
BETA
+1
images
On display at V&A South Kensington
China, Room 44, The T.T. Tsui Gallery

1320-1350 (made)
The Yuan (1271-1368) is the dynasty when China was ruled by Mongol emperors. Kilns became bigger to take advantage of economy of scale and were managed by competent entrepreneurs. Some kilns active in the preceding decades ceased production, but the Longquan, Jun and Cizhou kilns continued their success, Jingdezhen became an important ceramic producer. Yuan dynasty ceramics are as popular among collectors as their Song dynasty predecessors. The figurative subject of the vase is taken from Xi Xiang Ji The Story of the West Chamber and demonstrates the growing popularity of depicting illustrations on ceramic objects during the Jin and Yuan dynasties (1115-1368). This vase was originally used to store alcohol. 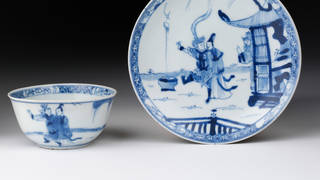