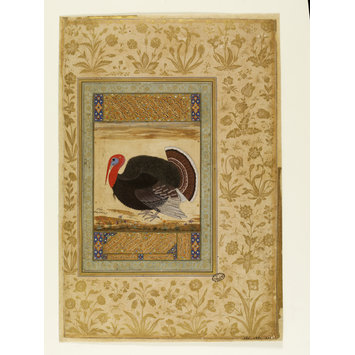 The painting of a North American turkey cock done for the Mughal emperor Jahangir (r. 1605-1627) records its arrival at the court in 1612. Jahangir had asked his friend Muqarrab Khan to procure rarities of any kind at the port of Cambay, on the western coast, and in 1612 a consignment of exotic birds and animals caused a sensation. Jahangir recorded this in his memoirs, written in Persian. The English translation is by Alexander Rogers and Henry Beveridge: "as these animals appeared to me to be very strange, I both described them and ordered that painters should draw them in the Jahangir-nama ["Book of Jahangir", his memoirs], so that the amazement that arose from hearing of them might be increased. One of these animals in body is larger than a peahen and smaller than a peacock. When it is in heat and displays itself, it spreads out its feathers like the peacock and dances about. Its beak and legs are like those of a cock. Its head and neck and the part under the throat are every minute of a different colour. When it is in heat it is quite red - one might say it had adorned itself with red coral - and after a while it becomes white in the same places and looks like cotton. It sometimes looks of a turquoise colour. Like a chameleon it constantly changes colour." The painting, signed by the leading artist of the court Mansur, was preserved in an album, probably during the reign of Jahangir when the floral borders were added to it. At an unknown date the album was dismembered, and this page was part of a group of folios bequeathed to the museum in 1921 by Lady Wantage.

Painting, in opaque watercolour and gold on paper, a turkey cock facing left, painted on a ground undecorated except for a line of flowers beneath its feet and streaks of clouds above. The artist's signature is beneath its wattle on the undecorated ground above the flowers. The painting is framed by bands of calligraphy above and beneath, and the page has borders of gold-painted flowering plants on undyed paper.

Opaque watercolour and gold on paper

'amal-e bande-ye dargah mansur nader al-'asr jahangir shahi'
'work of the slave of the court, Mansur, Wonder of the Jahangirian Age'
This is the signature of the artist, not an attribution.

A copy of this painting is in the Maharaja Sawai Man Singh II Museum, Jaipur: A.G. 839. Another turkey cock painted in Mughal India is in the Fitzwilliam Museum, Cambridge. 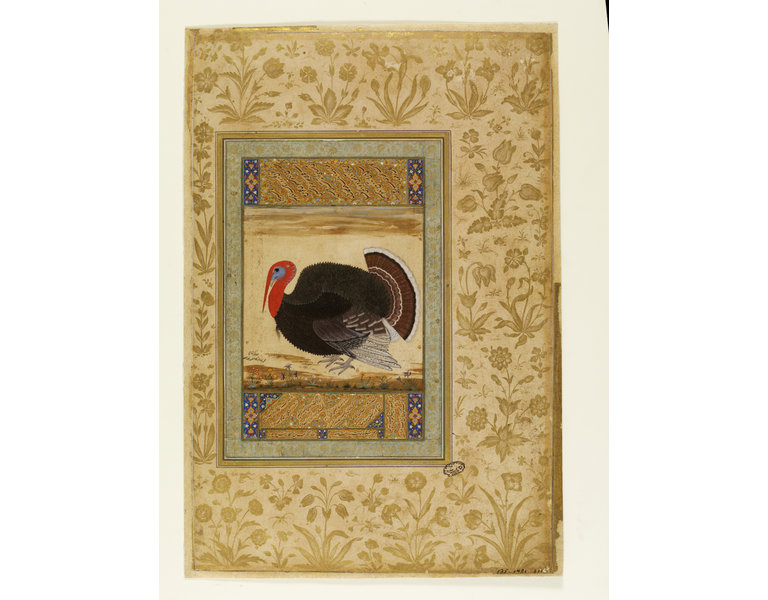