If you would like a larger file, or to use the image in other ways, contact our Licensing team.
BETA
No image available
BETA
We don’t have an image of this object online yet. V&A Images may have a photograph that we can’t show online, but it may be possible to supply one to you. Email us at vaimages@vam.ac.uk for guidance about fees and timescales, quoting the accession number: CD.45-2021
Find out about our images
On display at V&A South Kensington
Request to view at the Prints & Drawings Study Room, level C , Case MM, Shelf 2

I Still Believe in Our City

Poster
2020
This poster is one of a series of five posters from Amanda Phingbodhipakkiya’s 2020 I Still Believe In Our City project. The project was the artist’s response to the growing racism towards Asian and Pacific Islanders (API) in the United States during the Covid-19 pandemic. The five posters are designed for NYC bus shelters, each featuring a portrait of an Asian and Pacific Island individual alongside the anti-discriminatory messages: ‘I am not your scapegoat’, ‘I still believe in our city’, ‘This is our home too’, ‘I did not make you sick’, ‘We belong here’.

Phingbodhipakkiya explains the background behind the commission, and its outcomes:

“In February 2020, I went to Chinatown in Manhattan to get groceries. A familiar weekend ritual. But instead of the hustle and bustle, the noise, the chaos, the delightful vibrance, it was quiet. Unsettlingly quiet. A deep sense of foreboding loomed as I went about my shopping.

News outlets were reporting that a dangerous new flu-like virus, first spotted in Wuhan, China, had made its way to the US. And just like that, Chinatown had cleared out. Would there be more racism and xenophobia ahead for my people?

I soon found out. Reports of attacks on Asian Americans across the United States and around the world filled my feed. Yet few media outlets were covering it. In the days before New York City locked down, I got on the subway and a man next to me seethed, “Ew, gross” and fled to the other side of the subway car. I was stunned. A few days later, my parents were yelled at in a grocery store to “Go back to where they came from”. It broke my heart.

I wrote in my journal, trying to process what had happened. I didn’t know it then, but those words would soon appear in the art all over the city.”

In April of 2020, I saw that the NYC Commission on Human Rights had put out an open call for an artist-in-residence position. I applied immediately. Partnering with the agency tasked with upholding the City’s human rights laws, we could issue a bold, visible rebuke of this violence and harassment. But by late May, I hadn't heard back. I started to lose hope. Maybe the city would overlook our struggle. But just as I was processing the news of an Asian grandmother
being set on fire, I got the call.

The artist-in-residence program team had given us a schedule to follow. The actual making of art wasn’t on the agenda until early 2021. But there was no time to waste.

In my first meeting with the Commissioner, I shared my vision for a city-wide public art campaign dedicated to the Asian American community. She was immediately onboard. I decided that I didn’t need anyone’s permission to speak up for my community. A single installation wouldn't do. I needed Asian Americans across each of the five boroughs to know that they belonged and that the City was behind them. We would not take this hate lying down.

I met with community leaders and advocates, listening to their stories, their worries, their hopes. What emerged was over 100 works dispersed around New York City. This included a portrait series of intergenerational guardians defiantly declaring our belonging, splashed across 76 bus shelters around NYC selected for their proximity to anti-Asian bias incidents.

In each face, a loving compilation of myself, my friends, family and the community members. I wanted them to feel familiar. They could have been the daughter who was jeered and cursed at, the uncle who was shoved and spat on, the grandmother who was hit in the face. But instead of seeming afraid or upset, these guardians stood tall and proud. People tell me that seeing these defiant Asian faces makes them feel safe. It makes them feel like there’s room here for Asian American voices, journeys and dreams.

Millions of my Asian brothers and sisters have found peace and pride in my artwork. It’s found its way on the sides of buildings, on magazine covers, bus shelters and cultural centers. It’s a humbling and nearly unfathomable thought.

Art has the ability to soothe grief, amplify joy, and drive people to action. I want my art to do that. I want it to invite allies to stand with us. I want it to be a rallying cry to keep fighting for systematic change, more resources for our communities and our shared futures. 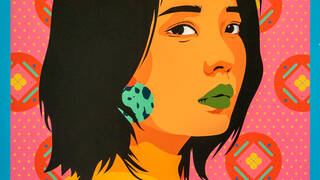 read 'I Still Believe in Our City' public art campaign Dissent can exist in many shapes and sizes. While it can be associated with anguish, frustration, and confrontation, dissent can also be a display of resilience, highlighting strength found in warmth and beauty – a means to offer peace and galvanise meaningful conversations. Amanda Phingbo...
object details