If you would like a larger file, or to use the image in other ways, contact our Licensing team.
Request to view at the Prints & Drawings Study Room, level C , Case GG, Shelf 56

Portrait Print
1794 (printed)
Sir Paul Pindar (ca 1565-1650) was a merchant and diplomat. He was born in Wellingborough, Northamptonshire and educated at Wellingborough Grammar School. Pindar initially entered the trade as the apprentice to an Italian merchant in London who sent him to Venice in 1584 at the age of eighteen. He was later involved in trade with the Ottoman Empire. He eventually became secretary to the English ambassador in Constantinople, Henry Lello and later ambassador himself. During this period he amassed a great fortune which enabled him to build for himself a fine mansion in Bishopgate Street Without, London just beyond the City walls. The facade of this house was given to the Victoria and Albert Museum in 1890 when the Great Eastern Railway enlarged the site of Liverpool Street Station and demolished the building. The facade is one of the largest objects in the Museum and is an extremely rare survival of a London timber-framed house built before the Great Fire of London in 1666. 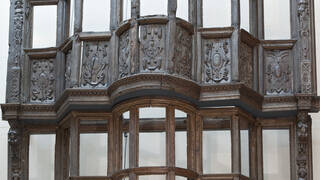 read Sir Paul Pindar's House The façade of Sir Paul Pindar's house is an outstanding survival of a London timber-framed house built before the Great Fire of 1666. It was built around 1599 by Paul Pindar (1566 – 1650), a wealthy merchant and diplomat who was knighted in 1620 by James I.
Object details