If you would like a larger file, or to use the image in other ways, contact our Licensing team.
BETA
+3
BETA

1935 (made)
+1
images
Not currently on display at the V&A
This dress, designed by Jeanne Lanvin, is made of purple satin, cut on the bias of the fabric. It is sleeveless and has a low cut rectangular neckline. The back of the dress is cut into a point, attached to the back of the collar and showing two triangles of naked flesh. A huge collar based on a rectangular form is made of triangles and squares. The collar is covered with narrow parallel rows of stitching which reinforce the fabric and allow the collar to keep its shape. Lanvin broke the long line of the dress by attaching two ribbons, equally covered with stitches, at either sides of the waist. The ribbons, once fastened, emphasise the waist, a new and important feature of 1930s fashion. By using one single, very strong colour in this dress, Lanvin achieved the simple, yet sculptural look of the 'classical' fashion of the period.

Satin became popular in the 1920s when it was increasingly used for costumes in the silent cinema for its evocative character and the way it attracted the light. In Hollywood cinema, satin became the emblematic fabric of the 1930s Art Deco evening dresses and was mostly used in monochrome colours. 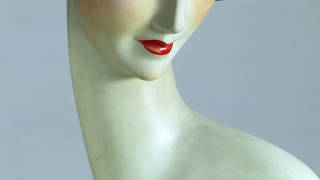 read Art Deco fashion Distinct, elegant and vivid in colour, items from the V&A's fashion collections reveal the relationship between Art Deco design and the clothing and jewellery of the 1920s and 1930s. From Jeanne Lanvin's haute couture to the bold geometric jewellery of Raymond Templier, Art Deco's multiple...
object details