If you would like a larger file, or to use the image in other ways, contact our Licensing team.
BETA
+3
BETA
+1
images
On display at V&A South Kensington
Fashioning Masculinities: The Art of Menswear

Half of a coat

Half of a Coat
1760s (made), (made)
Although partially preserved, this is nevertheless a very fine example of gentlemen’s fashionable clothing of the mid-18th century. It is the left half of a coat which had a round neckline and shaped, two-piece sleeves reaching to the wrist with a round cuff. Only the left sleeve has survived. The coat fronts curve from neck to hem, with wide skirts below the hip, set in pleats, one in front and one at the back of the side openings. There is an inverted pleat on the side of the centre back opening. There is a scalloped pocket flap at hip level. The sleeve and the pocket are lined with unbleached linen while the coat front, the portion of the back and pocket flap are lined with ivory silk twill. There are ten buttonholes on the left front, running from neck to the pocket flap. There are three buttons below the pocket flap and the cuff has three buttons along the top edge. The six exquisitely made buttons, covered with embossed silver foil additionally embellished with spangles and purl, indicate that this would have been a significant, high fashion purchase for the original owner. This conclusion is additionally supported by the striking, moiré or ‘watered’ silk of a superb quality. This is a silk with a thick ribbed weave that has been ‘calendered’ or pulled through heavy steel rollers to partially flatten the weave and create the effect of flowing water. The splendid, shade of orange is still vibrant. Galerie des Modes et Costumes Français, a series of fashion and costume plates that was distributed in Paris from 1778 to 1787, includes a plate entitled Acteur Bourgeois étudiant son role à la promenade (Actor studying his role while walking) showing a young man wearing a lilac waistcoat and breeches and an orange coat, implying that garments made of orange fabrics were popular among fashionable young Frenchmen during the second half of the 18th century. 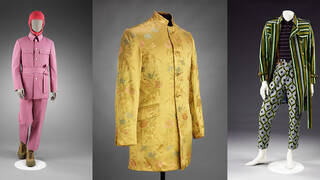 read In the pink: colour in menswear For centuries, colour in men's clothing has been a means for both imposing conformity, or expressing individuality. The associations of colour have changed over time – In the 1700s European men wore pink, for example, as a sign of wealth and power, rather than gender. Today the spectrum of...
object details