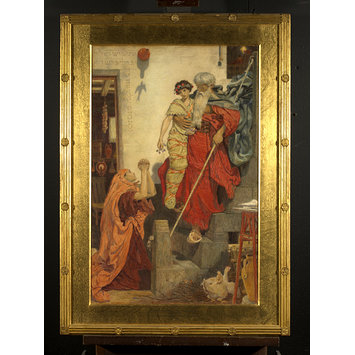 Ford Maddox Brown turned several of the illustrations that had been commissioned in 1863 for the Dalziel brothers' Bible Gallery into full-scale paintings. This one tells a story from the first Book of Kings. Elijah had miraculously supplied food for a widow and her son, and is called later to her house, where her son is dying. The widow accuses him of punishing her for her sins. But after a long vigil with the boy, Elijah brings him - still in his funeral shroud - down from the bedroom alive and well. This is an excellent example of the degree of historical authenticity at which the Pre-Raphaelites aimed. The humble interior, the rather Egyptian-looking steps and shroud, and the chicken with her chick, for example, give some flavour of biblical times, if not an accurate reconstruction. Brown's Manchester patron, Frederick Craven, commissioned the painting. He collected only pictures in watercolour. Brown later painted a replica in oil.

A bearded man dressed in red robes and a blue shawl carries a young figure down some steps at the foot of which a woman is kneeling with her hands held up as if praying. To the the viewers right in the foreground is a hen with a chick on her back. Glimpsed through a doorway to the left is a room wuth a string of onions hanging from the ceiling.

The following is the full text of the catalogue entry, p.214:

'The prophet Eiijah restored to life the widow's son, who had fallen ill and was thought to be dead. Brown showed the prophet carrying the boy down from the upper chamber to his thankful mother, illustrating the passage "And Elijah said, See thy son liveth. And the woman said to Elijah, Now by this I know that thou art a man of God, and that the word of the Lord in thy mouth is truth" (I Kings 17: 23-24). As if speaking these words, the widow kneels at the foot of the staircase "in an ecstasy of passionate thankfulness."

As in the case of The Coat of Many Colours (cat.76), many of the details were researched from ancient sources so as to represent the Biblical period accurately, but Brown also chose details for their symbolic meaning. At the top of the painting is a bottle, set into the wall to attract nesting swallows: the shadow of the returning bird signifies the return of the soul to the body. To show that the boy had only just come to life, Brown depicted him still bound up in his grave-clothes, studied from ancient Egyptian sources. The Hebrew writing around the doorway is from the Shemah, the prayer which the Jews were commanded to write on their doorposts (Deuteronomy 6: 4-9). Through the doorway is a glimpse of a kitched with a barrel and other vessels; this refers to the preceding passage in Kings, in which the widow's handful of meal in a barrel provided meals for herself and the prophet. Similarly, the oil lamp in the upper room represents the cruse of oil that did not fail. Brown included other homely details such as the string of garlic and the hen with its chick riding curiously on its back, a detail taken from the Luttrell psalter. The identity of the model for the widow is not recorded, but she may have been Fanny Eaton, a mixed-race model used by several artists of the Pre-Raphaelite circle for Eastern characters.

Like The Coat of Many Colours, this painting is based on one of the illustrations made by Brown for Dalziel's Bible, commissioned in 1863 although not published until 1881. Brown made several versions in oil and watercolour. This one is the most impressive, a tour de force of watercolour technique, in which Brown skilfully depicted the patterns and textures of the Middle Eastern textiles and the brilliant colours in the hot sunshine, which he described as an effect of "vertical sunlight". It was painted between September and November 1868 for Frederick Craven, and retouched the following year at Craven's request.

Craven lent it to the autumn exhibition of the Royal Manchester Institution in 1869. When the annual Heywood prize for the best picture was awarded to a view of the Piazza Navona at Rome by the genre and landscape painter Keeley Hallswelle, a furious controversy arose in the local press. Shields and others including Sidney Colvin complained that Brown's painting, "the finest picture in the exhibition" should have won the prize, arguing that the prizewinning painter's aim was "a low one whereas Madox Brown's is of the highest."' 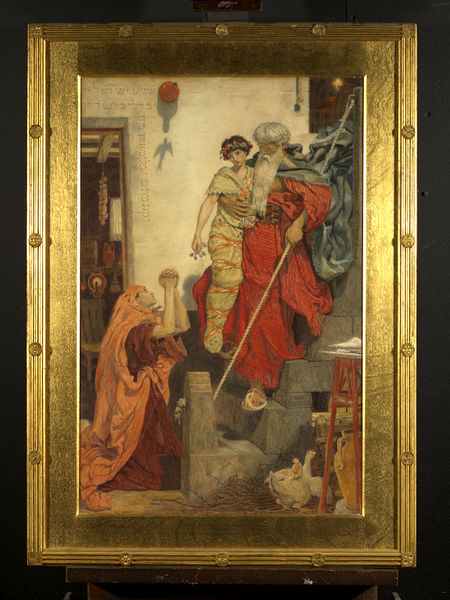