Photograph
08/1939 (photographed), 15/09/1939 (published), 12/1939 (published)
The German-born photographer Horst P. Horst (real name Horst Bohrmann) began to work for the French Vogue in 1931, a year after his arrival in Paris. He was greatly influenced by his Surrealist contemporaries such as Salvador Dali and Man Ray, using elements of Surrealism in his work.

This photograph was taken on the day he left France for New York, just weeks before the outbreak of the Second World War. It was then published in the French Vogue in December 1939. The dramatic lighting and the body, which is only partially seen, are elements which often occurred in Horst's work and suggest a Surrealist influence. 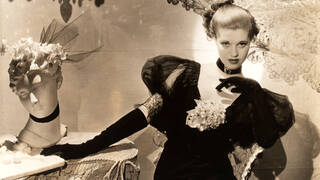