If you would like a larger file, or to use the image in other ways, contact our Licensing team.
BETA
+1
BETA
Not currently on display at the V&A

1972 (made)
Floris Neusüss and his wife Renate Heyne are German artists who work independently as well as collaboratively. Citing Man Ray and Lázló Maholy-Nagy as early inspirations, Neusüss has dedicated his entire career to extending the practice, study and teaching of the photogram, and is best known for his pioneering series, both in scale and visual treatment, of Körperfotogramms (whole-body photograms) in the 1960s and 70s, created by exposing the human figure directly onto photographic paper. Since that time, he has consistently explored the photogram's numerous technical, conceptual and visual possibilities.

Neusüss works often deal in opposites: black and white, shadow and light, movement and stillness, presence and absence, and in the translation of three dimensions into two. By removing objects from their physical context, Neusüss encourages the viewer to contemplate the essence of form. He creates a feeling of surreal detachment, a sense of disengagement from time and the physical world. Collectively, his images explore themes of mythology, history, nature and the subconscious.

Neusüss worked in collaboration with his wife Renate Heyne to create the unique photogram dress, which she wore on several occasions, captured in these two prints. The abstracted shape of Heyne’s body, front and reverse, is captured on the corresponding sides of the linen. It is a clever play on the idea that a garment might both reveal and conceal its wearer. 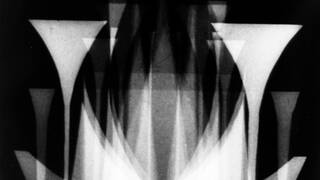 read Cameraless photography Cameraless techniques have been exploited and reinterpreted by successive generations of image makers and continue to be used by contemporary artists today. While related to the conventional practices of photography, cameraless images offer an alternative, experimental, radical and often r...
object details