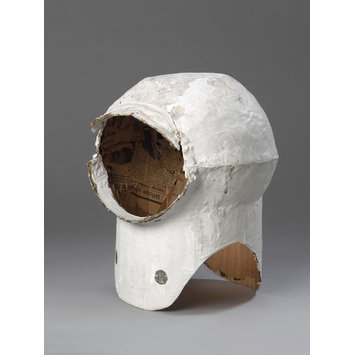 The Space Race of the 1960s captured people’s imaginations, as things which had seemed impossible only a few years before very suddenly became a reality, the drama unfolding on television screens around the world. Richard Blundel made this papier-mâché astronaut's helmet with help from his mother in the early months of 1969, at their home in Maidenhead, Berkshire.

Fancy dress astronaut's helmet, made from corrugated cardboard and papier-mâché, painted with white emulsion. The dome of the helmet was made around an inverted bowl, giving it a flattened top. The maker used pages from the Evening News newspaper dated 20th December 1968 for papier-mâché. The covering for the neck and chest is cardboard. There are two black circles painted on the front.

This helmet was made by the donor in the early months of 1969, he gave it to the Museum in 2016. Mr Blundel very kindly wrote-up his recollections of the object and its context, which are reproduced here:

Introduction
I was lucky enough to have grown up during the golden years of the 'Space Race' in the late 1960s and early 1970s. Like many children of my generation, I was captivated by the Apollo missions, collecting magazines and newspaper clippings and following the latest reports on BBC television, as narrated by Raymond Baxter, James Burke and other childhood heroes. I lived in a new (mid-1960s) detached house in Maidenhead, Berkshire, with my younger sister, Anne, and my parents, Alice and Ken. Our prosperous but otherwise unexceptional Home Counties town was memorably satirised by the writer John O'Farrell (1993:13), 'Maidenhead. The slag heaps and the dirt. The rattle of the giant wheel at the pit head. The faces of the coalminers as they trudged up the cobbled streets back from Cookham colliery...' Both socially and politically conservative, it later became the constituency of the Prime Minister, Theresa May. In the late-1960s, Maidenhead was attracting a growing population, which included people working at the ever-expanding Heathrow Airport, and commuters who headed for London by train or (like my Dad) along the newly-opened M4 motorway. The development boom spawned many new housing developments like ours, as well as shopping centres and relief roads, but offered little in the way of excitement for an eight year olf, other than the occasional unauthorised expedition onto nearby building sites.

The Night and Day Astronomy Club
At around this time, three friends and neighbours (Richard McBrien, Richard Jones and myself), formed the 'Night and Day Astronomy Club' (NDAC) to pursue our interest in space exploration. At that tender age I'm sure we fully expected to be travelling to the moon, if not the stars, during our lifetimes. The club was not particularly active, though we did collect space-related books and comics, build Airfix models and do some stargazing from our back gardens. We also persuaded our parents to take us to see the new (1968) Stanley Kubrick/Arthur C. Clarke film 2001: A Space Odyssey at the local Odeon. The darker and more complex themes clearly escaped me at the time, but I vividly recall that journey to the revolving space station, and the choreographed docking sequence to the sound of Johann Strauss's The Blue Danube. We had an optimistic, techno-centric vision of what the future would hold, and much of it revolved around space travel and shiny suits. Things turned out rather differently, and Billy Bragg's lyric (from The Space Race is Over, 1996) mirrors my own thoughts and feelings as I look back on those times.

Making the space helmet
It must have been in the early months of 1969, based on the dates of the newspapers (late December 1968) that we created this space helmet. I had just turned eight, so I'm sure that my Mum played a key role in the construction process. My recollection (which may be inaccurate) is that we got the idea for the helmet from the popular BBC TV programme Blue Peter - it was certainly the kind of thing they were doing at the time, and I was a loyal viewer throughout my childhood. We made the helmet with the standard papier-mâché, we put it in the airing cupboard to dry. Then I painted it with some white emulsion from the garage and added a few details in gold metallic paint. Needless to say, I was very proud of the end result.

The moon landing and writing to NASA
Along with millions of others around the world, I watched the grainy black and white TV coverage of the moon landing, which took place on 20th July 1969. That night, I borrowed an alarm clock so that I could get up on time to see Neil Armstrong descend the steps of the Lunar Module in the early hours of the following day (the NASA website states that Armstrong's 'one small step' took place at 02:56:15 GMT on 21st July, which perhaps explains why my parents were always so impressed by my commitment to the cause). In the weeks after the Apollo 11 mission returned, I collected magazine special issues and news clippings. I also wrote a letter to NASA at this time. I'm not sure what we wrote, but assume we sent greetings to the Apollo mission team from myself and the other (two) members of the Night and Day Astronomy Club. There was great disappointment when several months went by without a reply. But then, one day in 1970, an envelope arrived at our house addressed to 'Richard Blundel, NDAC'. The top left corner was emblazoned 'NATIONAL AERONAUTICS AND SPACE ADMINISTRATION, MANNED SPACECRAFT CENTER, HOUSTON, TEXAS 77058' and (perhaps the biggest source of excitement at the time), 'OFFICIAL BUSINESS'. Inside the evelope were two small, white cards, each featuring Neil Armstrong's autograph. Using my block printing set, I stamped 'MR NEIL ARMSTRONG' onto my card, mounted it on black paper and displayed it in a small photo frame until the ink began to fade.

Growing up
On reflection, it is amazing my space helmet survived for so long. In contrast to most childhood projects, it was stored away in a large set of built-in bedroom cupboards that my Dad had constructed, occasionally seeing the light of day but somehow always returning to its hiding place in the family home. It finally returned to me in 2011, after more than 40 years, when my sister and I were facing the difficult task of clearing the house - Dad had passed away in 2009 and Mum was moving somewhere smaller. Taking a picture of our nine year old son wearing the helmet early in 2017, I am reminded of our confidence in the capacity of technology to deliver a bright and shiny future - and of how much our parents did to nurture those early enthusiasms.

After the Second World War there were two world superpowers: the United States of America (USA) in the west, and the Union of Soviet Socialist Republics (USSR) in the east. The clashing political ideologies of these two enormous polities resulted in the Cold War (1947-1991), the tensions between them manifesting through several regional ‘proxy’ wars, and in competition to outdo each other in industrial production and in technological advancement. The latter was most clearly shown in two main outputs: the race to develop bigger, more effective arsenals of nuclear weaponry; and in the Space Race. These were linked: the vehicles capable of leaving the Earth’s atmosphere were developed from ballistic missile technology. The race was effectively begun on 4th October 1957, when Sputnik 1 became the first artificial satellite to enter orbit. What followed Sputnik’s successful ascension was an escalating series of milestones, enormous technological leaps forward were made by both superpowers in the space of just twelve years, between Sputnik and the United States placing human beings on the Moon. The Space Race became one of the key characterisations of the 1960s, it was a time when space travel moved from the realm of science fiction into that of science fact. As such, it captured the imagination of people around the world.

Fancy-dress; Made by children; Children & Childhood 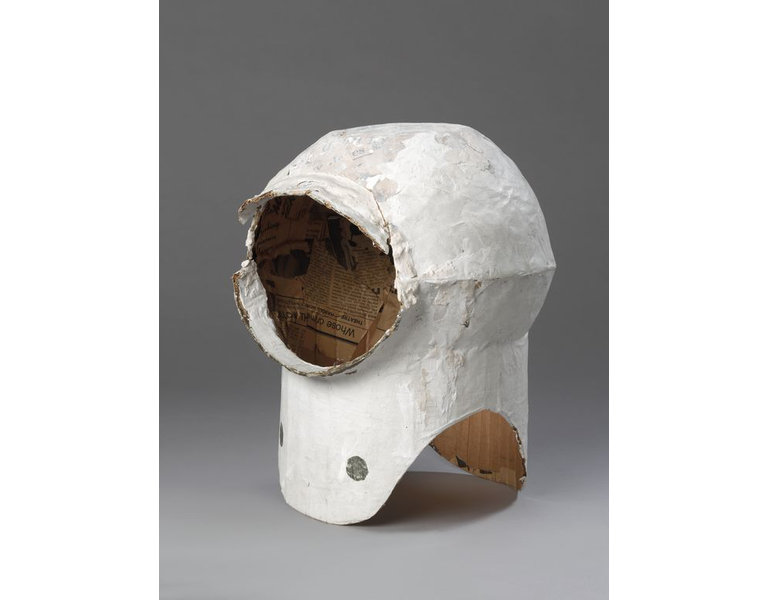