Photograph of Bertram, Beatrix and Rupert Potter with partial border design of yellow and purple flowers

Drawing
1898 (made)
Beatrix Potter (1866-1943) is one of the world's best-loved children's authors and illustrators. She wrote the majority of the twenty-three Original Peter Rabbit Books between 1901 and 1913. The Tale of Peter Rabbit (Frederick Warne, 1902) is her most famous and best-loved tale.

Rupert Potter was a major influence on his daughter's artistic development from an early age. In the 1860s Rupert had become fascinated by the new art of photography. He was elected a member of the Photographic Society of London and exhibited regularly at annual exhibitions. During the Potter family's long summer holidays in Scotland and the Lake District it was Beatrix's delight to accompany her father on photographic expeditions. Happy to be by his side and excited by the possibilities of the new art form, she became his favourite and most forbearing subject and later became an avid photographer herself, inheriting one of her father’s old cameras. Beatrix produced several floral border designs in pencil and watercolour which she specifically intended as decorative mounts for her father's photographs. They demonstrate her great fondness for her father and her desire to be associated with his artistic pursuits. This design of yellow and purple flowers is the only example in the Victoria and Albert Museum which has been used as Beatrix intended, with a photograph pasted onto the centre of the design. Beatrix has chosen a photograph taken by her father in 1898 during a family holiday at Lingholm, an estate on the north-west side of Derwentwater in the Lake District. Beatrix stands while her father and brother, Bertram, sit on a paved patio leading from the house to the garden. 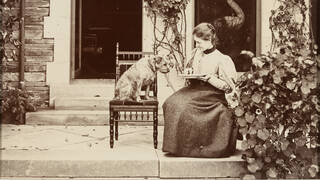 read Introducing Beatrix Potter Beatrix Potter remains one of the world's best-selling and best-loved children's authors. She wrote and illustrated 28 books, including her 23 Tales which have sold more than 250 million copies worldwide. In her later years, she became a farmer and sheep breeder and helped protect thousand...
object details