If you would like a larger file, or to use the image in other ways, contact our Licensing team.
BETA
+10
BETA
+8
images
On display at V&A South Kensington
Request to view at the National Art Library

Paper peepshows or teleoramas were first published in the 1820s by a German book and art seller called Heinrich Friedrich Műller. His concept owes much to 18th century optical curios, such as the cosmoramas which were built into gallery walls or the cumbersome boîtes d’optique, which were large, wooden boxes with multiple scenes. In contrast to their predecessors, Műller’s teleoramas were small and primarily constructed from paper and cloth. They consisted of staggered paper panels which were connected at the sides by flexible material bellows. The front and back boards of the peepshow pulled apart, to reveal a concertina structure and the diminishing paper panels created an effect of receding perspective, which lead the viewer’s gaze towards the back scene. 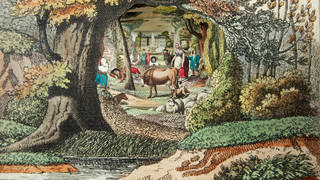 download Make your own: paper peepshow Paper peepshows are like pocket-sized stage sets unfolding before your eyes. Made from layered paper panels, complete with action-packed scenes, they expand to create an illusion of depth and reveal a miniature world. Try making your own with these free templates and guide designed by arti...
object details